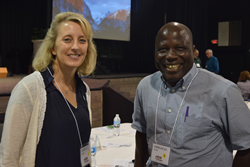 I realized rather quickly that people were hungry for community,” said AWOP founder and president Chuck Proudfit. “People just wanted to be with other Christians so they didn’t feel alone in a secular work world.

At Work on Purpose (AWOP) shared its best practices Friday with leaders from across the nation eager to learn how to create marketplace communities in their own hometowns.

About 200 Christian leaders from greater Cincinnati and Dayton, with guests from LeTourneau Center for Faith and Work in Dallas; Cru in Sioux Falls, S.D.; Asbury Seminary in Wilmore, Ky.; and the Luis Palau Association in Portland, Ore., attended the annual XL Summit held at Grace Chapel in Mason.

AWOP is recognized as the nation’s largest city-wide, marketplace ministry, with almost 9,000 members. It was formed in 2003 by a dozen working Christians who had a desire to help greater Cincinnati’s Christians integrate their faith at work by helping people connect where the Holy Spirit leads them.

The group originally met in 2003 at Old St. George Catholic Church in Clifton and quickly grew into a large group with a mission to restore the Christian community to the work world and transform one life at a time.

“I realized rather quickly that people were hungry for community,” said AWOP founder and president Chuck Proudfit. “People just wanted to be with other Christians so they didn’t feel alone in a secular work world.”

AWOP became an “ekklesia” or a community called out to identify felt needs in the community, eliminate poverty and transform lives one at a time. Proudfit joined forces with the Rev. Jeff Greer, pastor at Grace Chapel to form BIZNISTRIES®; faith-based enterprises whose profits fund ministry advancement.

AWOP’s emerging network of marketplace ministry initiatives include BIZNISTRIES®; Witheos, which provides co-working space and vocational support for working Christians; Neighbors Embracing Transformation (NET), which seeks to transform neighborhoods as it cares for the spiritual, relational, motivational and material health of the people; Collaboratories, faith-based business roundtables for working Christians; Marketplace Christians Making Connections (MC2), a community for faith-based networking; and Made to Flourish, a pastor’s network for the common good.

Speakers who shared their efforts to serve the community by equipping Christians in the workplace included: Ryan Chapin of General Electric, who founded Living in Faith Together (LIFT) and is author of Go, Make Disciples at Work; Aly Balser and Dave Farris of Cincinnati Christian University; Jamie Noyd of InterVarsity, which provides graduate student ministry at the University of Cincinnati; and the Revs. Rick Shonkwiler of White Oak Christian Church in Cincinnati; Jeff Duerler of Lifespring Church in Harrison; and Randy Ballard of Kings Point Church of God in Maineville.

AWOP is based in Blue Ash, Ohio and operates with volunteers and contractors. Its leadership springs from small groups of three or four who tackle a problem by serving the felt needs in a community, said Proudfit. Its organization is modeled on the early Church, where disciples pooled resources to help the community—and virtually eliminated poverty in the process.

“AWOP is more of an organism than an organization,” said Proudfit. “Our organization has the look and feel of a molecule. Two or three atoms come together and form a chemical bond. The molecular charge is the Holy Spirit.”

About At Work on Purpose: At Work on Purpose (AWOP) is the nation's largest citywide marketplace ministry, connecting almost 9,000 members in the Cincinnati area and Miami Valley. The nonprofit is dedicated to helping everyday Christians find and fulfill God's purposes for them at work.