Her Royal Highness, The Duchess of Cornwall, meets with ShelterBox 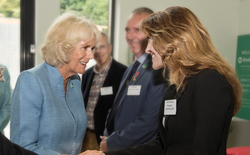 "I just wanted to say how wonderful all of you are who work for ShelterBox."

Her Royal Highness, The Duchess of Cornwall, met with ShelterBox USA President, Kerri Murray, at the ShelterBox Headquarters in Cornwall, England on Wednesday, July 19, to officially open the nonprofit’s new public Visitor Center in the UK.

The center will educate thousands of visitors each year on ShelterBox’s humanitarian aid, its complex operations, and its rapid response to disasters worldwide.

During the official visit to ShelterBox, the Duchess met with Kerri Murray and operations staff to discuss the ongoing work in Syria, and participated in a live Skype call with Response Team members from the frontlines in Cameroon where they are delivering aid to families fleeing conflict.

The Duchess then packed the first ShelterBox at the Visitor Center, and cut a birthday cake bestowed upon her by ShelterBox staff in honor of her 70th birthday this week. The cake, a sponge cake replica of an actual ShelterBox, was cut by the Duchess with an actual hand saw that is used in a ShelterBox tool kit.

The Duchess commented, "That’s the first time I’ve cut a cake with a saw! But it doesn’t surprise me. ShelterBox [is] always coming up with something new. I just wanted to say how wonderful all of you are who work for ShelterBox."

ShelterBox USA President, Kerri Murray, also commented on the visit, "It was a privilege to meet Her Royal Highness at such an exciting chapter in ShelterBox’s history, and to brief her on the ambitious plans we have to grow ShelterBox to serve 10 times the numbers of families annually by the year 2025. Right now, there are more than 85 million people displaced in our world by conflict and disaster, and the need for the work of ShelterBox is massive. ShelterBox is preparing every day for the worst day ever."

"We deploy immediately when disaster strikes, providing survivors with lifesaving shelter and equipment to help families who have lost everything access emergency shelter and have needed supplies to begin to rebuild their lives. As a disaster relief organization, it is typically on the worst day ever that media attention is given to our work. But as the headlines fade from large emergencies, so can public support."

"The Royal Family has been instrumental in raising awareness of the work of ShelterBox, and in keeping much needed attention on its humanitarian efforts. During my visit with the Duchess, I shared with her the exciting growth of ShelterBox USA and extended an invitation for her to visit our operations in the US. The Duchess was thrilled to learn about the growth of ShelterBox USA and excitedly accepted the invitation to visit with her husband, Prince Charles.”

After meeting with Murray, the Duchess was then introduced to the charity’s most outstanding volunteers, response team members, and fundraisers, including international cyclist Tim Bridgman, who with his wife Sharon set off to cycle 37,000 miles across four continents to raise awareness and funds for ShelterBox in 2012.

On April 26, 2014, in a remote area in Bolivia, Sharon died after being struck by a vehicle, but last year Tim bravely completed the remaining 15,000 miles on his own, finally crossing the finish line in Alaska last July. Read the complete story.

The Duchess then met with several other volunteers including, Colin Bell, who completed the equivalent of 48 marathons for ShelterBox in one year, and Sarah Thomson, a presenter on UK television’s Bear Grylls Survival School, and an endurance athlete and sports coach who held a fundraiser for ShelterBox by running 870 miles in 24 days.