Bill W.: The Creative Force Behind Alcoholics Anonymous and To Climb a Gold Mountain Win 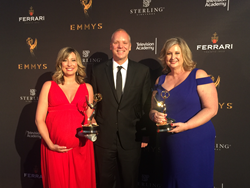 “We’re delighted to be recognized by the Los Angeles members of the Television Academy for the content we are producing locally and in partnership with independent producers,” said Andrew Russell, PBS SoCal President and CEO. “We strive to deliver high quality programming that informs and inspires our audiences, and that tells stories that aren’t being told elsewhere.”

The complete list of Los Angeles area Emmy Awards is available at http://www.emmys.com/la.

About PBS SOCAL:
PBS SoCal KOCE is the home to PBS for Greater Los Angeles and Southern California. We deliver the full schedule of PBS programs plus content that is for, about and by the people of Southern California. Our content is available free through four broadcast channels, at pbssocal.org, on our mobile apps, and via connected TV services. And we provide the community with early education resources and cultural and educational experiences through partnerships, events and grassroots outreach. PBS SoCal has offices in Century City, Costa Mesa, and Los Angeles. Connect with us at pbssocal.org Facebook, Twitter and Instagram.