Portugal. The Man's Eric Howk: Generating Nationwide Buzz for Individuals with Disabilities in the Workforce through Public Service Announcement

NTI announces the release of a Public Service Announcement (PSA) in collaboration with guitarist Eric Howk from the American rock band, "Portugal. The Man." With Portugal. The Man's song "Feel It Still" on the Billboard Hot 100 and the number one song on Billboard Alternative Songs and Top TV Commercials Chart, Howk is happy to team up with NTI to increase awareness of NTI's job-placement services for Individuals with Disabilities and Disabled Veterans. 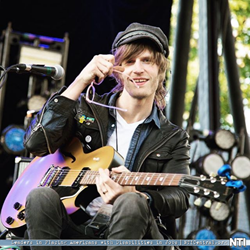 Eric Howk of Portugal. the Man

We are honored to have Eric Howk, partner with NTI to advocate for the human rights of Individuals with Disabilities and spread the word of the services NTI offers to over 60 million individuals nationwide. - Mike Sanders, Director of Marketing, NTI

National Telecommuting Institute (NTI) (http://www.nticentral.org) announces the release of their collaboration with indie pop/rock band “Portugal. The Man” and guitarist Eric Howk to create awareness of the job services NTI provides for Americans with Disabilities and Disabled Veterans. One in every five Americans has a disability, making Howk's message about NTI valuable to more than 60 million people across the nation.

“Portugal. The Man” is a prolific and forward thinking band from Wasilla, Alaska. The group consists of John Gourley, Zach Carothers, Kyle O'Quin, Jason Sechrist and Eric Howk. Eric Howk, the band’s guitarist, has a special understanding of the difficulties Americans with Disabilities face. While on tour in 2007, Howk fell into a 12-foot-deep pit at a construction site, breaking his T4 vertebrae. The accident left him paralyzed from the sternum down, but through his perseverance, Howk has successfully learned how to keep up with the band’s busy tour schedule. He makes an effort to notice and connect with fans who use wheelchairs or other assistive devices and give them encouragement and support.

To extend his support of individuals with disabilities, Erick Howk along with Redlight Management, recorded the following Public Service Announcements for distribution at the following web address http://portugaltheman.nticentral.org.

The website features a video message from Howk to educate individuals with disabilities of the job-services NTI provides as well as 8 audio PSA's developed for radio distribution. Title tracks "Live in the Moment" and "Noise Pollution" from Portugal. The Man's Woodstock album, highlight the PSA's. Background music from the Portugal. The Man's previous album, Evil Friends, are also showcased within the PSA's and include hits such as Atomic Man, Hip Hop Kids, Modern Jesus, and Someday Believers. Finally, a segment of Eric Howk's, independent release "Say" is illustrated within one of his messages.

With Portugal. The Man's release "Feel It Still" on the Billboard Hot 100 list and the number one song on Billboard Alternative Songs and Top TV Commercials Chart, NTI is ecstatic with the opportunity to partner with Howk to increase awareness of opportunities for Americans with Disabilities to find work. Portugal. the Man's latest album, Woodstock, was named in honor of the 1969 festival and is the band’s attempt to address sociopolitical unrest and promote an appeal for basic human rights. NTI looks forward to a partnership to make a positive difference in the lives of individuals with disabilities and extend their rights.

About NTI: National Telecommuting Institute (NTI) is a 501 (c)(3) not for profit organization with headquarters in Boston, MA. It has been supporting Americans with disabilities since 1995. NTI provides training and job placement in work at home positions across the United States. NTI pioneered staffing virtual call centers with Americans with Disabilities, including Disabled Veterans, who work from home.

About “Portugal. The Man”: “Portugal. The Man” is an American Indie pop/rock band from Wasilla, Alaska. The group consists of John Gourley, Zach Carothers, Kyle O'Quin, Jason Sechrist and Eric Howk. Gourley and Carothers met and began playing music together at Wasilla High School, and the band is proud of its Alaskan roots. The band has been with Atlantic Records since 2010. “Portugal. The Man” has been celebrating the release of “Woodstock” with their biggest world tour thus far, set to travel through the summer.