“The Bible Runners” from Christian Faith Publishing author Andy Delancy is a dystopian thriller about a not-too-distant future where a man is tasked with bringing a resurrection of the now illegal ‘Holy Bible’ after stumbling upon abandoned copies. 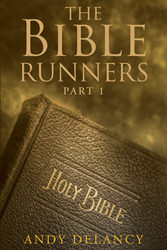 “The Bible Runners” is a dystopian thriller set in the near-future where religion has been suppressed by a hostile government. “The Bible Runners” is the creation of published author, Andy Delancy, who attended Mississippi College in Clinton, Mississippi, majoring in English literature continuing his education with a doctorate in theology from Slidell Baptist Seminary and has been active in the ministry for over thirty years.

Published by Christian Faith Publishing, Andy Delancy’s new book takes readers into a dark future where the world has been ravaged by several calamities. In response, a repressive government has stepped in to provide order by suppressing religion. This all begins to change as government employee Chris Matthews stumbles upon a crate of bibles.

The kingdom of God will never be destroyed. There will always be a remnant even if it looks like God is dead. God will have men in place for such a time when the world has been decimated. The Spirit of God will rise through His Word.

Chris Matthews is such a man, although he has no idea God is about to use him. While working for the state, he stumbles across an abandoned part of town where several stores and an old printing shop were left when the state cleaned up the area. Inside the printing shop covered in dust, he finds several dust-covered boxes filled with the now illegal books with the title “Holy Bible” printed on the cover. He begins reading, and the Word changes his life. He believes and is converted to faith in Jesus. Can one man such as this start a movement to carry God’s word to the country?

View a synopsis of “The Bible Runners” on YouTube.

Consumers can purchase “The Bible Runners” at traditional brick & mortar bookstores, or online at Amazon.com, Apple iTunes store, Kobo or Barnes and Noble.

For additional information or inquiries about “The Bible Runners,” contact the Christian Faith Publishing media department at 866-554-0919.