More Than Enough Mangia For Everyone

Debrianna Mansini’s The Meatball Chronicles, a culinary journey, performs at CSz Philadelphia at the Adrienne Theater September 10-12 in the 2017 FringeArts Festival. Her production co ordinates with Casta Diva, an Italian BYOB, to create a delicious and often hilarious evening full of love for food and family. 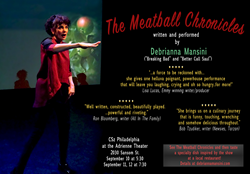 "...it's where we celebrated our joys and hide our sadness; all of it is told through my recipe for a meatball. And everyone wants to eat at the end." Debrianna Mansini

Mansini and her Meatball Chronicles is proud to announce her most recent collaboration for the FringeArts Festival with Casta Diva, just a few steps from Rittenhouse Square. The Italian BYOB is a warm Italian style eatery with dishes inspired by tradition, much like Mansini's show. Chef and owner, Stephen Vassalluzzo has an aesthetic that matches Mansini's love for food and family, so the pairing is perfection. Mansini herself is thrilled. "I cannot wait to see what Chef Stephen has in store. His love for locally sourced ingredients is in total alignment with who I am and what I do in my own kitchen. And since people who see my show are usually hungry by the end, I am certain no matter what he prepares, anyone who dines there afterward will have a very memorable evening."

The Meatball Chronicles follows one woman through sometimes heart wrenching and often humourous meals, that align with stories of her childhood, her relationships with men, and in particular, her complicated relationship to her mother. No matter what your family heritage, Mansini crafts this piece in a way that transcends her own story into universal themes that anyone who has a family can identify. "Even though the story is personal, I think everyone can relate to some part of it- the familial relationships that struggle through immigration, mental illness and love. I personally see everything through the lens of food - as I say in the show, it's where we celebrated our joys and hide our sadness; all of it is told through my recipe for a meatball everyone wants to eat at the end."

DETAILS:
The Meatball Chronicles has toured across the country and now, with family history in Philadelphia, Debrianna Mansini brings this delicious, often hilarious journey of food, life, and love to the City of Brotherly Love. From the value of making a good pie to garlic reminding her of her mother, Debrianna Mansini catalogues the culinary and family stories of her Italian immigrant family. “If I want to know you I cook for you,” Mansini notes. Experience this lighthearted tour of sharing love through the meals we cook for one another.

BIOGRAPHY:
Debrianna Mansini is an actor who has been seen in film (Hell or High Water, Crazy Heart), television (Breaking Bad, Better Call Saul, Longmire) and theater. She has worked Off Broadway at the Soho Repertory Theater and trained with NYC’s Circle in the Square before moving west to Santa Fe.

Mansini is playing the lead for consistent sold out audiences in the Santa Fe premier of Heisenberg, by Simon Stephens and directed by three time Emmy winner, Robert Benedetti.

She is an active company member of ForGiving Productions, where she recently performed in the wildly popular Love, Loss and What I Wore, Imaging Brad, and in David Lindsay Abaire's Good People she was invited to play the role of Margaret.

With a burning passion for activism, Mansini is creator and co-writer of the web series CYPHERS and the upcoming REACTION 21. "I believe deeply in and committed to using my skills and talents to promote community and consciousness.”
Mansini's husband David Forlano is a well known Philadelphia artist and the video artist for the show. A man of many talents, Forlano is known for his jewelry partnership FordForlano. His work is in the Philadelphia Museum of Art as well a number of other museums and galleries across the country.