The Early Adopters of the Uber Moment of Banking Will be the Mass-affluent, Pilatus Bank’s Chairman Argues 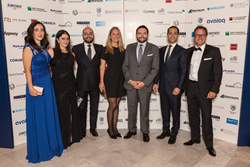