Linda Gross Brown, head and sole artist of Gross Brown Studio, and her painting "Footsteps #7" exhibited at The Allied Artists of America's 104th Annual Exhibition; "Footsteps #16" named finalist in The Artist's Magazine's Annual Art Competition; Linda takes a departure from "Footsteps" series with a new and different painting in the works. 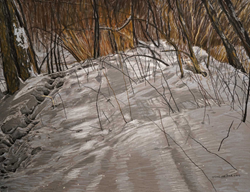 "Footsteps #16" a finalist in The Artist's Magazine's Annual Art Competition

Although the "Footsteps" series has received much critical acclaim and decoration over the years, Linda is taking a break from these paintings to work on something a bit different. A new piece is currently in the works and is expected to be finished by the end of the year.