Aquarium takes the lead in an emotional NAPHIA Leadership Forum

Two of Aquarium Software’s Top Dogs, Ed Shropshire and Andrew Sherwin, made an emotional return to the North American Pet Health Insurance Association (NAPHIA) leadership Forum recently. Having now released its assessment of the similarities and dichotomy between the US and UK pet insurance markets, Aquarium concludes that emotion is the key to unlocking pet insurance market potential both sides of the pond, and beyond. 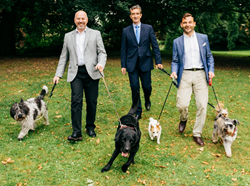 74 per cent of Americans who have never had pet insurance represents a massive market opportunity and while cash is king, buying insurance for pets is a decision made on experience and emotion.

Ed’s presentation led with the emotional connection between pet and pet parent, backed up by Aquarium’s latest YouGov research conducted in both the US and UK. Ed revealed that NAPHIA delegates working under any assumption that the US and UK markets are very different - couldn’t be more wrong. Confusingly, they couldn’t be more right, either.

“There is something of a special relationship between pet insurance markets in the UK and US markets that people have been slow to realise,” said Ed Shropshire, Aquarium Software’s MD. “The exciting thing is, if these similarities and differences hold true worldwide, they represent a roadmap for successful globalisation and commercialisation of the pet insurance market. It would seem emotional attachment could be the globally unifying theme that binds pet parents to pets and insurer, unlike any other insurance product.”

The same questions were asked in the UK and the US and showed less than five per cent variance on average between the opinions of US and UK pet owners overall, with many uncanny similarities - particularly in how pet parents view emotional ties with their pets. Broad agreement came in agreeing pets are just as important to the family as humans (US 72 per cent agree; UK 69 per cent agree) and a majority in both nations would save their pet first over a stranger, if both the pet and the person fell in a river.

“Focusing on the emotional connection between pet and pet parent and its impact on the customer journey, are themes of critical importance to UK-US pet insurance sectors, but also further afield,” added Mark Colonnese. “Asia and the Far East are pet projects for Aquarium and we are seeing there how emotion with regard to pets, coupled with respect for trusted brands is capable of delivering significant gains in market share.”

“74 per cent of Americans who have never had pet insurance represents a massive market opportunity and while cash is king, buying insurance for pets is a decision made on experience and emotion,” explained Ed. “It is not a purely financial transaction like car or house insurance and should not be treated as such. A marketing approach based on our emotional responses as pet parents is much more likely to be effective.

Once persuaded to purchase the policy, pet parents need the right customer journey to see the advantages of continuing to renew and intuitive technology and software can help insurers improve their pet proposition while at the same time delivering a profitable pet insurance business model with long term viability.”

Aquarium’s findings were supported by NAPHIA’s own research, which also strongly indicated that pet insurance is an emotional decision and not simply a rational one.

Aquarium Software’s specialist pet insurance solution spanning premiums rating, policy admin, billing and claims has been implemented by a number of insurers around the globe. For further information contact Aquarium Software on +44 (0)161 927 5620 or visit http://www.aquarium-software.com