The only part of the rocket to survive the scorching heat of re-entry is now on permanent display exclusively at Flight Path Museum at LAX. 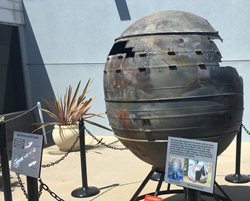 It’s wonderful the museum can give visitors the opportunity to examine our space debris for free, and in such an intimate environment.

It literally fell from outer space - debris from a Delta II Rocket that returned from orbit in 2011, blazing through Earth’s atmosphere and ultimately crashing into a farmer’s field in Uruguay.

The only part of the rocket to survive the scorching heat of re-entry was the titanium motor case, which is now on permanent display exclusively at Flight Path Museum at LAX.

“It really is an exciting artifact to see, and is the most recent addition to the Museum’s Space Gallery Exhibit,” said retired Air Force Col. Steve Soukup, the Board Member who arranged to have the reentry artifact placed on display at the museum.

Standing at five-feet and weighing about 120-pounds, the reentry debris artifact was once the case of the third stage, solid-propellant motor of a Delta II rocket. This Delta II rocket launched the GPS IIR-10 satellite into space on December 21, 2003 from Cape Canaveral.

The third stage motor case remained in orbit for more than seven years before atmospheric drag caused its orbit to decay. On March 3, 2011, the stage came flaming through the atmosphere and crashed in a farm field near Artigas, Uruguay. The farmer witnessed the fireball streak across the sky and felt the earth shake when it crashed in his field.

It’s easy to identify the areas of the motor case burned and melted by the searing heat of re-entry. The “bluing” is a result of the intense heating, which also melted wire harnesses, hardware and electronics mounted on the case. “The difference between the motor case before launch and after reentry are quite remarkable,” said Col. Soukup. “It’s wonderful the Museum can give visitors the opportunity to examine our space debris for free, and in such an intimate environment.”

Flight Path Museum and Learning Center is a nonprofit, community-based museum honoring aviation pioneers, showcasing the history of LAX, commercial aviation and the aerospace industry. The mission is to encourage youth to pursue education and careers in aviation-related fields. The Flight Path Museum exhibits are filled with memories of aviation’s golden age of flight and houses one of largest collections of vintage flight attendant uniforms. Flight Path Museum operates in cooperation with Los Angeles World Airports and is located at 6661 West Imperial Highway. Open Tuesday through Saturday, 10 AM to 3 PM, admission and parking are always free. Visit http://www.flightpathmuseum.com