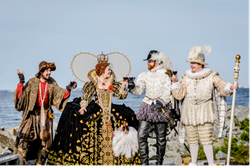 On the grounds of the famous outdoor drama, The Lost Colony, attendees will taste wines from around the world, discover local craft beer, sample savory local fare and enjoy live entertainment.

On Roanoke Island where history, legends and grapes intertwine, The Lost Colony Wine and Culinary Festival’s Grand Tasting debuts on Saturday, September 30th. On the grounds of the famous outdoor drama, The Lost Colony, attendees will taste wines from around the world, discover local craft beer, sample savory local fare and enjoy live entertainment. Surrounded by breathtaking views of the Roanoke and Pamlico Sounds, there is no better way to spend a fall day on the Outer Banks. The Lost Colony Wine & Culinary Festival’s Grand Tasting event opens at 12 noon for VIP ticket holders ($75) and at 1 pm for General Admission ($50). The Family Coppola’s Virginia Dare Winery partners with the Roanoke Island Historical Association for this “don’t want to miss” festival in benefit of The Lost Colony.

Roanoke Island is the site of Queen Elizabeth I’s first attempt to establish a colony in the New World, and is the birthplace of America’s first English child, Virginia Dare. The Lost Colony, tells the story of the 1587 colony and has performed on this historic site since 1937. Roanoke Island is also home to the Mothervine, America’s oldest cultivated grapevine. The island’s history is imbedded with fabulous legends! The Virgin Queen and Sir Walter Raleigh’s dreams, the colony’s unsolved disappearance, and a love story that tells how the grapes of the Mothervine became stained red. The Lost Colony Wine & Culinary Festival celebrates Roanoke Island’s history, legends, and heritage with wine, handcrafted beer and sumptuous food.

Francis Ford Coppola is intrigued with the mystery and legends of the Lost Colony. When Virginia Dare Wines, a North Carolina winery during the 1800s, became available for purchase, The Family Coppola seized the opportunity to add its legendary wine to its portfolio of wineries and resorts. In 2015 The Family Coppola launched the revitalization of Virginia Dare Winery at its new home in Sonoma County, promoted as “American Wines Since 1835.” Crafted with grapes from the finest viticulture regions in California, Virginia Dare Winery wines are rich with characteristics befitting an American legend: Pure. Natural. Distinctive. The partnership with The Lost Colony Wine & Culinary Festival reflects The Family Coppola’s appreciation of history and storytelling, and celebrates the treasures, people and places that shaped this great country.

The Lost Colony Wine & Culinary Festival opens with a Vintner’s Dinner featuring Virginia Dare Wines at the Duck Woods Country Club in Southern Shores on Friday, September 29th. A multi-course meal will be fabulously paired with the wines by Chef Thomas. To purchase tickets or for more information on the Vintner’s Dinner and the Grand Tasting on Saturday, September 30th please visit our website, http://www.tlcwinefest.com, or call (252) 473-2127. Vintner’s Dinner tickets and VIP tickets for the Grand Tasting are very limited and early purchase is encouraged. The festival is generously funded by the Outer Banks Visitors Bureau and is sponsored by several local partners including First National Bank as the Noble Sponsor. For a full listing of the Festival’s supporters, please see our website.