Jessica Serrano & Daniel Manriquez’s New Book “The Witness” Is A Philosophical, Eye-Opening Work That Delves Into The Unknowns Of Religion

Recent release “The Witness” from Page Publishing authored by Jessica Serrano & Daniel Manriquez is both informative and religious; this book aims to change and/or strengthen the reader’s theological opinions. 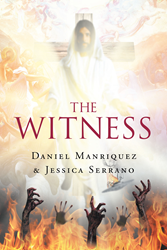 Jessica Serrano & Daniel Manriquez, have completed their new book “The Witness”: a dogmatic explanation of religion, answering the mysteries and questions in the written word of the Bible. This work will provoke the reader to think more about the truth and question their own theories.

Daniel Manriquez is a prisoner confined in the California Department of Corrections. He is a father and grandfather. Prior to the completion of this book, Daniel had spent most of his adult life in solitary confinement. Jessica Serrano is Daniel’s fiancé. She is a mother and supportive significant other. Daniel and Jessica parted ways for a brief moment, they were somehow reunited, and they completed this work as one. She was the moving force behind this publishing.

Both Daniel and Jessica along with a legal team put together by attorneys Terry Singleton, Gerald Singleton, and former attorney Hank Ramirez are currently fighting to overturn Daniel’s unlawful conviction and to obtain his freedom.

Daniel asks, “How old is the earth? Have you ever wondered what happened to the dinosaurs? And the Neanderthals? Was there a pre-Adamic civilization? And what about the watchers, Nephilim, the aliens, the pyramids, and the all-seeing eye? What does all that mean? Is there a connection? And were those who died during the flood (in the days of Noah) really human? And where did the different races come from? Most importantly, have you ever wondered what the Bible says about any of this?”

In story like form, authors Daniel Manriquez and Jessica Serrano answer these hidden mysteries and explain certain parts of the Bible (including the creation of our world, the flood, and the crucifixion and resurrection of Jesus), in such a way that even a child could understand it.

Manriquez and Serrano conclude, “This book is intended to not only revolutionize your theological beliefs (and to dispel any so-called biblical contradictions) but also to start an awakening as to what is written and what is really out there.”

Readers who wish to experience this profound work can purchase “The Witness” at bookstores everywhere, or online at the Apple iTunes store, Amazon, Google Play or Barnes and Noble.