Recent release “My Real Hue” from Page Publishing author Daniel Yves Eisner is a deeply evocative true story of the author and the burdens placed on him by enduring a toxic family environment. 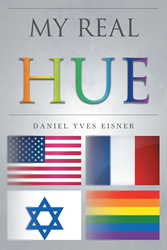 Daniel Yves Eisner, a consultant, expert witness, and educator in the insurance business over a span of forty years, has completed his new book “My Real Hue”: a gripping and potent autobiographical tale of a man who has suffered the experiences brought by his upbringing in a dysfunctional family.

Daniel Yves Eisner is a first-generation American born in New York City to an upper middle-class Jewish family headed by a Francophile mother and a British father. Daniel was raised on the south shore of Long Island and lived in metropolitan New York for thirty years followed by thirty-one years in Minneapolis, Minnesota, spending extensive periods of time in Paris, France, connecting with his strong French heritage. As such, Daniel had no lack of material to tell his life story.

Published by New York City-based Page Publishing, Daniel Yves Eisner’s poignant tale details the incredible difficulties that a person must face in a family that is unsupportive. Daniel’s story shows how he has overcome these burdens that have been placed up him. He reminds readers that they are not alone in the world and that there are better alternatives to living life in anguish. Readers facing similar circumstances will find inspiration and hope in Daniel’s encouraging tale.

“My Real Hue” is an extraordinarily brave man’s quest to fully understand and accept himself despite his family obstructing his path. Though it spans five decades, the story is a poignant reminder that adult life is constantly and comprehensively affected by childhood.

From the instant readers meet young Danny, his torturous relationship with his parents is evident. His dysfunctional family capitulates everything from challenges with coming to terms with his sexuality to a set of burgeoning neuroses. He discovers the only way to save himself is to sever ties with the very people who brought him into the world.

The reader will accompany Danny on his painful journey toward shattering the age-old conceptions of family being paramount to an individual’s support and success. Readers in similar circumstances to Danny’s will be confronting a thought-provoking alternative to the self-destructive, self-loathing, guilt-ridden, depressing, dangerously unhealthy, stressful, and often suicidal existence associated with feeling inextricably attached and obligated to an abusive and dysfunctional family. Danny demonstrates to the reader that the potential stigma of being estranged from one’s family may be well worth the tradeoff of being able to live out one’s life far more happily, peacefully, healthfully, and self-fulfilled than one could have ever imagined.

Readers who wish to experience this potent work can purchase “My Real Hue” at bookstores everywhere, or online at the Apple iTunes store, Amazon, Google Play or Barnes and Noble.