Mile of Music returns to Appleton, Wisconsin, this week with nearly 1,000 live performances in its milestone fifth year. The four-day festival is made possible with the support of more than 100 sponsors. 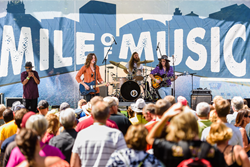 Mile of Music will return for its milestone fifth year on August 3 in Downtown Appleton, Wisconsin (photo by Graham Washatka of Graham Images)

Going into our fifth year, it’s been inspiring to see so many supporters share the same vision for making a music experience of this magnitude possible.

Mile of Music, presented by Tundraland, is set to welcome 225 artists to Downtown Appleton starting this Thursday, August 3, thanks to the support of more than 100 sponsors.

The free, four-day festival in Northeast Wisconsin – Mile 5 – will return with nearly 1,000 live performances at 70 venues after receiving tremendous support from both community and national sponsors. This support includes everything from in-kind donations and stage/merchandise partnerships to $100K in financial backing from Tundraland.

“We wouldn’t be able to put on a music festival of this size and scope without so many community-minded sponsors on board,” said Dave Willems, Mile of Music co-founder and marketing executive. “Going into our fifth year, it’s been inspiring to see so many supporters share the same vision for making a music experience of this magnitude possible.”

Among the list of 2017 sponsors, Tundraland has signed on as the festival’s presenting partner for the third consecutive year. In doing so, the organization continues to recognize how music and art can affect a community’s culture and has supported the festival as a way to make music accessible to everyone. Stone Arch Brewpub is back as the official craft beer partner of Mile of Music, offering its signature Americana Pale Ale. This year, Southern Comfort has also joined the list of supporters with its Southern Mule as the featured cocktail of Mile 5.

Willems explained that there are an incredible number of logistics that go into planning Mile of Music each year, and it wouldn’t be possible to pull off a feat this large without the sponsors who step in to fill the gaps.

To see a full list of this year’s sponsors, visit: https://mileofmusic.com/sponsors/.

Mile of Music runs from August 3-6, 2017. It is a cover-free zone that showcases artists’ original work with genres ranging from pop/folk, Americana/roots and bluegrass to indie and funk rock. There are many local acts scheduled to appear as well as soloists, duos and full bands traveling from as far as Nashville, New York, Los Angeles, Ontario and Paris to play.

Beyond live performances, the festival also includes Music Education Team Workshops that are designed to involve attendees in the music-making process. These include instrument/dancing workshops, jam sessions, sing-alongs and much more.

About Mile of Music
Mile of Music is an artisan, original music festival that began in August 2013, bringing more than 200 bands and solo artists to Downtown Appleton each summer to perform nearly 1,000 live music sets over four days. The collaborative event was co-founded by Appleton marketing executive Dave Willems and Appleton-based national recording artist Cory Chisel, with support from nearly 100 community organizations and sponsors and more than 300 volunteers. For more information, visit http://www.mileofmusic.com.