Arni’s in Indiana Inducted into Pizza Hall of Fame

From unlikely franchisee to pizza kingpin, Arni Cohen’s empire takes a spot in the Pizza Hall of Fame. 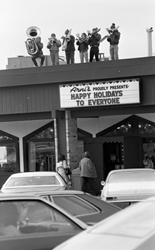 Arni's hosting acts from jazz and bluegrass to live comedy. They eventually grew to seat nearly 500.

Arni’s in Lafayette, Ind., has been inducted into the Pizza Hall of Fame, which celebrates America’s oldest and most beloved pizza restaurants.

Created by PMQ Pizza Magazine, the world’s authority on pizza, the Pizza Hall of Fame, located at http://www.PizzaHallofFame.com, pays tribute to the rich cultural history of American pizza and honors the perennially popular U.S. pizzerias that have been in business for 50 years or longer.

Arni’s was founded in 1965 by Arni Cohen. Cohen purchased an existing Pizza King franchise, then another in 1971. He soon broke off to truly rule his own growing pizzeria empire, simply called Arni’s. From the late 60’s to early 80’s, the original Arni’s thrived as a rollicking entertainment hotspot. The pizzeria continues to grab attention from famous returning customers including Axl Rose, Drew Brees and Fuzzy Zoeller. Arni himself was involved with the company until his death in 2002. Cohen’s sons, Kurt and Brad Cohen, now co-own the company.

“Pizza is such an integral part of the American experience,” Green said. “We wanted to commemorate its role in our culture. Every pizzeria in the Pizza Hall of Fame—and each one that will be inducted in the future—is a local landmark. These pizzerias are more than restaurants—they are institutions in their communities.”

Joe Bailey, a popular bartender and manager at Arni's for over 30 years,