Shonin Streamcam, the Bodycam for Civilians, Launches on Kickstarter

Shonin announces Streamcam, the body camera for civilians that uploads video directly to a secure cloud via cellular or wi-fi instantly with one tap – scheduled to ship Feb 2018. Free devices will be offered to qualifying non-profit organizations. 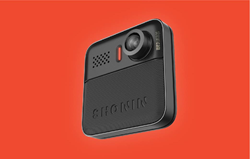 Shonin Inc, the technology company that empowers people to easily and securely record public interactions, today announces the launch of its flagship product, the Shonin Streamcam. With hate crimes and street harassment on the rise, this new body-worn camera is designed to help anyone document a potentially harmful or uncomfortable interaction with video proof. Everything about the Shonin Streamcam — from its iconic design to its ability to automatically upload to the cloud while recording— was carefully crafted to help people reliably document their experiences when they need to the most. Starting today, anyone can back Shonin Streamcam on Kickstarter at:

“We’re proud of what we have built, and look forward to making the Shonin Streamcam available for anyone who wants to feel safer as they go about their day,” says Sameer Hasan, CEO & Founder, Shonin Inc. “Much abuse and injustice still goes unaddressed, and in many cases perpetrators believe they can get away with it because it’s their word against ours, unless we have video proof. Shonin helps people secure video proof in situations where using their smartphones is not practical.”

Born out of the desire to “put an unbiased witness on your side”, Shonin Streamcam is an easily wearable, rugged and waterproof camera. The Shonin Streamcam device is supported by feature-rich, intuitive software on mobile and in the cloud.

Record Directly to the Cloud in One Tap
Through either a direct cellular connection with a SIM card, or while tethered to your smartphone’s wi-fi hotspot, Shonin Streamcam uploads video immediately to a secure cloud location or broadcasts to live video services like Facebook Live. All without even taking your phone out of your pocket.

Fully Featured
Recording video with the Shonin Streamcam is made easy. Designed specifically with urgency and speed in mind, the device sports a large button on the front face of the device. A simple press of the button starts recording and streaming with no precision required. Shonin Streamcam captures your side of the story in crisp, wide-angle video. Video resolution is 1080p to local SD card and 720p when streaming or uploading to the cloud. Streamcam boasts IP67 waterproofing, and before launch, will undergo rigorous impact testing to ensure it can be worn worry-free in even the roughest scenarios.

Great Hardware Goes Best with Great Software
The Shonin app lets you instantly view your videos as soon as they have finished recording. Capture video, view video, simple as that. The Shonin app allows you to easily make edits without losing the original raw footage, which is always securely stored until you choose to delete it. With a couple of taps, you can instantly share videos with your friends or on social media. The Shonin app also lets you customize just about everything about the video capture or device behavior, with settings that let you turn off the recording light, adjust the resolution, enable or disable cloud upload, and more. Once selected, settings take effect immediately.

Iconic Design
Just like a home security camera, Shonin Streamcam’s colors, visibility and iconic design can act as a possible deterrent to aggressors.

Battery Life - Up to 2 hours of recording time, up to 4 hours with additional battery pack.

Free Devices for Qualifying Organizations
Shonin will offer a limited number of free, as well as heavily discounted, devices to qualifying non-profit organizations.

“We want to help non-profits that are on the front lines, driving real societal change,” said Sameer Hasan. “The work these organizations do is inspiring, and we would love to see their members equipped with the right tools. By providing them with free devices and associated services, we can do our part to help make those necessary changes a reality.”

Representatives from non-profit organizations are asked to get in touch with Shonin by emailing ngo(at)shonin(dot)io.

About Shonin
Shonin creates technology that enables citizens to securely collect, edit and share video proof. Formed in 2016, our mission is to achieve a safer, fairer and more just world through technology, starting with our first product, Shonin Streamcam, the cloud-connected wearable security camera.