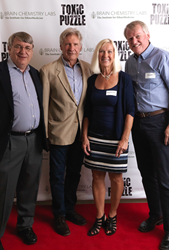 “Our research demonstrates a close link between environmental health and human health,” said Dr. Cox. “In this, water quality is a key issue. Cyanobacteria thrive on nitrogen and phosphorous from agricultural and sewage inputs."

Harrison Ford attended the Jackson Hole premiere of “Toxic Puzzle – Hunt for the Hidden Killer” on July 31, 2017 at the Center for the Arts in Jackson, Wyoming.

Directed by Scandinature Films’ Bo Landin and narrated by Ford, the award-winning documentary film portrays the efforts of ethnobotanist Paul Alan Cox and his team at Brain Chemistry Labs (BCL), a nonprofit research consortium in Jackson, Wyoming, to find and fight environmental triggers for neurodegenerative illnesses. It explores a role for toxins in the environment — including those produced by cyanobacteria in algal blooms — as possible triggers for ALS and Alzheimer’s disease.

“Our research demonstrates a close link between environmental health and human health,” said Dr. Cox, who participated in a Q&A session after the screening. “In this, water quality is a key issue. Cyanobacteria thrive on nitrogen and phosphorous from agricultural and sewage inputs."

“This is a medical detective story, and I have been amazed to see how a small laboratory in Jackson Hole is taking the lead with a global team of 50 scientists. While scientific revelations abound, I am also impressed by the dedication of these scientists, who put the patients and their families afflicted with these serious diseases first. It helps to build an emotional story that will grab viewers around the world,” Bo Landin told the audience.

Also known as Lou Gehrig’s disease, ALS is a fatal and rapid neurodegenerative disease. While there is no known cure for either ALS or Alzheimer’s disease, the Jackson lab and their colleagues are evaluating a new drug candidate, now in a Phase II clinical trial for Alzheimer’s at Dartmouth Medical School, which was also approved for Phase II clinical trials for ALS as a means of slowing disease progression.

The hunt for a trigger and cure began in Guam, where Dr. Cox worked with ecologist Dr. Sandra Banack and chemist Dr. Susan Murch to uncover the reason behind the high incidence of neurological disease among the Chamorro people.

“We discovered that a bacterial toxin is produced by cyanobacteria resident in the roots of cycad trees. When villagers in Guam eat tortillas made from cycad seeds, or when they eat animals who have foraged on cycad seeds, they unwittingly ingest this bacterial toxin,” reports BCL Senior Scientist Dr. Banack.

"We were concerned when we discovered that cyanobacterial blooms in municipal and recreational waters also produce the toxin,” added BCL Senior Research Fellow Dr. James Metcalf.

Together with Australian colleagues Dr. Ken Rodgers and Dr. Rachael Dunlop, BCL discovered that the bacterial toxin can cause neuroproteins to misfold. Last year, BCL and the Miami Brain Bank published in Proceedings of the Royal Society B that vervets chronically exposed to the toxin develop brain tangles and plaques similar to those of Alzheimer's patients. L-serine reduced the density of the plaques. Last fall, BCL published the results of an FDA-approved Phase I human clinical trial, which showed that L-serine doses up to 30 grams per day appeared to be safe for ALS patients.

“We now have FDA approval for a larger trial to see if L-serine can slow disease progression in humans,” said Dr. Cox.

Selected for international festivals, “Toxic Puzzle” is now being presented to audiences worldwide. It recently created record ratings during broadcasts in Sweden and Norway.