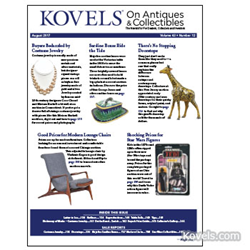 Costume jewelry sold well at auction in Connecticut and is featured in a sale report in Kovels on Antiques & Collectibles August 2017 newsletter. Retro, Art Deco and midcentury costume jewelry has seen a resurgence and collectors love pieces by Miriam Haskell, Chanel, and Joseph Mazer. Find pictures and prices of costume jewelry necklaces and pins by these designers and others that sold for up to $700. Star Wars collectibles appeared in two spring sales in Ohio, where the highest prices paid were for mint condition toys in original packaging. Kovels’ August issue pictures classic Star Wars action figures, vehicles, even a Luke Skywalker poster, along with their prices. And buyers looking for investment yet comfortable furniture bid on American and European lounge chairs at auction in New Jersey. Prices ranged from $1,500 to $11,800 for functional chairs with modern lines by known designers such as George Nakashima, Eero Saarinen and others.

Bidders in New Jersey and online paid a wide range of prices for figural cast iron doorstops. Kovels’ latest issue pictures a Hubley giraffe that brought more than $10,000, a Huck Finn that went for $4,500 and a colonial woman for $90, as well as others that sold in between. And majolica sardine boxes auctioned in Indiana from $65 to over $400. A fashionable addition to the Victorian table, hostesses used them to serve the small fish. Modern collectors admire the marine-themed decoration or use them to hold trinkets. Kovels’ August newsletter pictures examples by George Jones and Wedgwood with brightly colored tin glazes and relief molded fish, shells and waterfowl.

Kim Kovel goes “on the road” to Zurich, Switzerland, to enjoy beautiful scenery and the flea market at Bürkliplatz. The popular illustrated Collector’s Gallery answers readers’ questions about a Royal Bonn charger, cowboy & Indian birthday candle holders, silver coin box and a medallion with a fraternal organization emblem. August’s Dictionary of Marks lists costume jewelry makers. And more than 70 antiques and collectibles are listed in the Buyer’s Price Guide.

About Kovels.com
Kovels.com, created by Terry Kovel and her daughter, Kim Kovel, provides collectors and researchers with up-to-date and accurate information on antiques and collectibles. The company was founded in 1953 by Terry Kovel and her late husband, Ralph. Since then, the Kovels have written some of America’s most popular books and articles about antiques, including the best-selling Kovels’ Antiques & Collectibles Price Guide. The website, Kovels.com, online since 1998, offers more than a million free prices, and includes a free weekly email, “Kovels Komments.” It gives readers a bird’s-eye view of the market through the latest news, auction reports, a Marks Dictionary, readers’ questions and answers and much more.