Recent release “Throw the Ball High” from Page Publishing authors Mickey Crowley and Ralph Wimbish is a lighthearted and entertaining memoir of a sports-crazy Irish kid growing up in Elmhurst, Queens, in the thirties and forties who becomes one of the best-known and most beloved referees in college basketball. 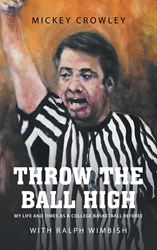 Mickey Crowley, a fixture in college basketball for decades and Ralph Wimbish, a former editor and sportswriter for the New York Post, have completed their new book “Throw the Ball High”: an engrossing reflection upon nearly thirty years officiating NCAA and international basketball games.

No doubt about it, there was a time when Mickey Crowley was the busiest man in basketball.

A legendary, world-class referee with a reputation for humor, fairness, and getting the call right, Mickey always has been a man in motion. He officiated dozens of college games annually from 1962 until 1991. His last game was the NCAA championship battle between Duke and Kansas.

A member of six halls of fame, Mickey was on the ground floor in the 1980s when the Big East emerged as the nation’s premier basketball conference. His face was a fixture at Madison Square Garden.

Michael Jordan, Patrick Ewing, Shaquille O’Neal, Chris Mullin, and Lew Alcindor (Kareem Abdul-Jabbar) are among the more notable players Mickey has seen up close since he began his officiating career in 1957.

Mickey also ran one of the nation’s top basketball camps for referees for nearly forty years. He traveled the world officiating games, notably in Puerto Rico, Uruguay, and Yugoslavia. Among his many stops was a stage in Las Vegas, where he once sang a duet with Suzanne Somers.

Being a referee was Mickey’s part-time job. For years, his full-time job was as a Nassau County administrator who assigned officials for hundreds of high school, college, and junior college sporting events. A native of Queens, New York, he served in the army, drove a truck, tended bar, managed a baseball team, and fathered a family.

Now, he can proudly add author to his vast list of accomplishments with the publication of this autobiographical memoir, “Throw the Ball High”. Crowley lived in Long Island for many years, and now resides in Calabash, North Carolina. He is available for interviews upon request.

Published by New York City-based Page Publishing, Mickey Crowley and Ralph Wimbish’s enlightening and entertaining memoir is a must-read for any sports fan.

Readers who wish to experience this fascinating work can purchase “Throw the Ball High” at bookstores everywhere, or online at the Apple iTunes store, Amazon, Google Play or Barnes and Noble.

Page Publishing is a traditional New York-based full-service publishing house that handles all the intricacies involved in publishing its authors’ books, including distribution in the world’s largest retail outlets and royalty generation. Page Publishing knows that authors need to be free to create - not bogged down with the logistics eBook conversion, establishing wholesale accounts, insurance, shipping, taxes, and the like. Its roster of accomplished authors and publishing professionals allow writers to leave behind these tedious and time-consuming issues and focus on their passion: writing and creating. Learn more at http://www.pagepublishing.com.