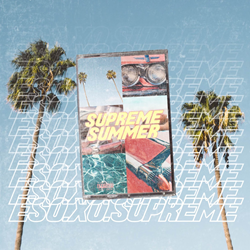 Portland artist Eso.XO.Supreme drops a wavy new 4-track EP "#SUPREMESUMMER" as a perfect soundtrack to end the season. Eso.XO.Supreme has been heating up all year with consistent videos, singles, and shows in LA, New York, and Austin, TX plus more. Finally, he comes through with a new project for his supporters and fans. Produced by LexuzontheBeatz and Mxller, Eso switches things up on "#SUPREMESUMMER" bringing an island vibe with Afro Beat, Caribbean, and Reggaeton influenced production to lighten the mood and keep the party lit. Sex, Drugs, and R&B describe Eso's vibe perfectly on his new EP.

The new project by Eso.XO.Supreme is currently available to stream and download through Coast 2 Coast Mixtapes, as well as all major streaming services.