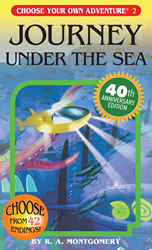 Journey Under the Sea by R. A. Montgomery

YOU are a deep-sea diver on a solo mission, searching for the lost city of Atlantis. In one story line, you confront hungry sharks, the bends in another, and you might end up in an Atlantean zoo... for life.

Chooseco, publisher of the world-famous Choose Your Own Adventure(R) interactive book series, is celebrating the 40th anniversary of its title Journey Under the Sea by R. A. Montgomery.

You remember that one, right?

YOU are a deep-sea diver on a solo mission, searching for the lost city of Atlantis. In one story line, you confront hungry sharks, the bends in another, and you might end up in an Atlantean zoo... for life.

Montgomery originally published Journey Under the Sea via independent publishing house, Vermont Crossroads Press, in 1977. He wrote under the pen name Robert Mountain, and imagined it as the first in a series of books that drew on Montgomery’s experiences with role-playing simulations and working with reluctant readers at a summer camp. The original title of the series was “The Adventures of You.” It later became “Choose Your Own Adventure” after Montgomery brought the project to Bantam Books and became the first title on their new children’s list. The series went on to sell over 270 million books in the following forty years, making it the 4th-bestselling children’s series of all time.

“Journey Under the Sea is one of the most iconic titles from the series,” Shannon Gilligan, Chooseco CEO & Publisher, explains. “This is the YOU character who leads the Choose Your Own Adventure series, and what made this book different than the other early works that contributed to the series was that the YOU was identifiable to a child but also very powerful. This book is entirely driven by action, and that separates it from the other early entries in the series which were experimenting more with format.”

In the early 2000s, R. A. Montgomery and Shannon Gilligan took the leap to establish their own publishing house and revamp the beloved children’s book series through their purpose-built publishing company Chooseco. The small company ran from a converted farmhouse in Vermont and by 2006, the original series’ 18 bestselling titles returned to bookstores, with new artwork and updated text.

Journey Under the Sea was released as the second title in the Classics series and has remained on the bestsellers list since the relaunch. To date, Chooseco is responsible for bringing 2 million copies of Journey Under the Sea into print in 15 languages and 20 territories.

To celebrate the milestone, Chooseco has released a Special 40th Anniversary Edition (http://www.cyoa.com/products/journey-under-the-sea) and will be selling the book for its original price of $1.25 for one day only, Wednesday, August 9th. Additionally, the company is giving away a 40th Anniversary poster (http://www.cyoa.com/journey), charting the book’s “journey” over time.

About Chooseco
Founded in 2003, Chooseco publishes the Choose Your Own Adventure series and has recently expanded its list to include linear YA with the release of the WEREGIRL trilogy last year. Widely commended for its appeal to reluctant readers, the Choose Your Own Adventure series is the 4th bestselling book series of all time, with more than 270 million copies sold in over 40 languages. Each story is written from a second-person point of view, with the reader assuming the role of the protagonist and making choices that determine the main character’s actions in response to the plot and its outcome. Find out more at http://www.cyoa.com.

To find out more about Chooseco, please contact Elizabeth Adelman at webmail(at)chooseco(dot)com or by telephone at 802-496-2598.