Silhouette Rising refuses to dwell on tragedy. This is an uplifting band: passion for life and its infinite possibilities has always been apparent in the songs. 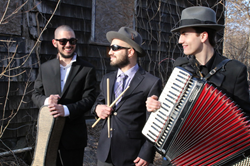 It’s touching, and poignant, and a lovely reminder of a gifted artist taken from us too soon.

Watch the exclusive premiere of "Technicolor" on Huffington Post

This is one of the last songs listeners are ever going to get from Silhouette Rising. Not because demand has slackened for the band’s music – on the contrary, the group’s legend continues to grow well beyond the city limits of Boston. These musicians retain their remarkable power to entertain and inspire. No, the story of Silhouette Rising has reached its conclusion for a different, altogether regrettable reason. Frontman, songwriter, and creative firebrand Cameron Liberatore suffered terrible injuries in a car accident in 2014. Although he continues on his long road to recovery, he won’t be returning to musical activities any time soon. One of the most charismatic figures in the Northeastern indie underground has been stolen from fans by fate.

Yet Silhouette Rising refuses to dwell on tragedy. This is an uplifting band: passion for life and its infinite possibilities has always been apparent in the songs. They’ve extended that optimism to the Happiness III project – an album of tracks built from Liberatore’s musical ideas, and one that cements his legacy as one of Boston’s most inventive and passionate songwriters and bandleaders. So beloved and respected is Liberatore that Silhouette Rising had no trouble attracting superior musicians to help them realize the Happiness III project, including Howi Spangler of Ballyhoo! and Tye Zamora of Alien Ant Farm.

But Happiness III is more than just a tribute. It’s also an opportunity for the rest of the group to demonstrate their formidable skills. Just like the rest of Silhouette Rising’s recorded output, the album is bracing, tuneful and muscular, filled with memorable melodies and dramatic performances. There’s a bittersweet quality to the new songs, too; a sense of the ephemerality of life and a newfound determination to make every second count. Ironically, it might well be the fullest realization of Liberatore’s vision.

Take “Technicolor,” the first single. Here’s a heartfelt singalong anthem that nods to the tradition established by bands like Death Cab For Cutie and Jimmy Eat World. Yet its message – one that asks the listener to change “what’s black and white” into full color – is delivered by Silhouette Rising pianist Robert DiNanno with the sense of urgency that comes from real experience. That’s apparent in the video, too, where simple human interaction and kindness brings greyscale scenes to vivid, polychromatic life. Both Spangler, who sings the hook, and Zamora, who handles bass, make appearances during the performance sequences of the video. And right there, at the end of the clip, after the band has finished roaring, is a twenty second clip of Liberatore, acoustic guitar in hand, singing a snatch of the melodic idea that the band would transform into “Technicolor.” It’s touching, and poignant, and a lovely reminder of a gifted artist taken from us too soon.

Watch the exclusive premiere of "Technicolor" on Huffington Post