The interactive Riftwalk experience featuring 27 photo opportunities and large character statues was designed to mimic Summoner’s Rift, a map central to the landscape of the League of Legends game created by Riot Games. 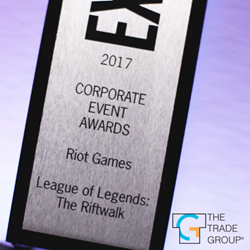 It was such an honor to be recognized by EXHIBITOR with this award. The Riftwalk was something Riot did as a tribute to their fans, so it’s a project we were delighted to help create.

EXHIBITOR Magazine recently recognized The Trade Group and game developer Riot Games with a Corporate Event Award for creating a one-of-a-kind interactive experience as a thank you to the fans of the popular video game League of Legends.

The Riftwalk experience, which was initially launched at PAX East in 2016, was so popular with League of Legend fans that Riot decided to take the Riftwalk on the road. The experience was featured at all five stops of the 2016 League of Legends World Championship Tour esports events, including Toronto, San Francisco, Chicago, New York and Los Angeles.

According to Miriam Wagliardo, Event and Exhibitor Services Manager at The Trade Group, “Our team really invested their hearts and souls into the Riftwalk experience, and it was so worth it, because it brought so much happiness to the League of Legends fans.”

The Trade Group handled every detail regarding production of the experience including conception, design, RFID integration, A/V and sound and lighting, as well as installation and dismantle. The immersive design provided plenty of flexibility to ensure the experience would fit well at a variety of different venues.

“Fans said they felt like they were actually walking through Summoner’s Rift. They also loved the fact that they could touch the displays and take multiple unique and personal photos throughout the experience,” Wagliardo says.

To receive an EXHIBITOR Award for the Riftwalk experience meant a lot to Wagliardo and the team who brought the experience to life. As she explains, “It was such an honor to be recognized by EXHIBITOR with this award. The Riftwalk was something Riot did as a tribute to their fans, so it’s a project we were delighted to help create.”

To learn more about producing interactive experiences at live events and other trade show and corporate event services available through The Trade Group, call 800-343-2005 or visit http://www.tradegroup.com.

Be sure to check out the video and case study on Tradegroup.com.

About The Trade Group: The Trade Group is a full-service, award-winning provider of products and services for trade shows, corporate events, retail environments and an endless array of face-to-face experiences. The organization helps clients share their unique stories through a comprehensive suite of solutions that includes: exhibit design and fabrication, graphic design and production, exhibit management, digital applications, video production, exhibit accessories, strategic marketing and more.