Pierre Dimaculangan’s “Clash of Alliances: Trials of the Middle Kingdom 2” is a Tale of a Knight on a Covert Operation to Overthrow an Invasion from Otherworldly Forces

A direct sequel to "The Sage, the Swordsman and the Scholars", recent release “Clash of Alliances: Trials of the Middle Kingdom 2” from Page Publishing author Pierre Dimaculangan is a mystifying and inventive tale following the Ming Dynasty’s Sun Xin and his company on stealthy endeavor to unravel the plans of their enemies from the Underworld. 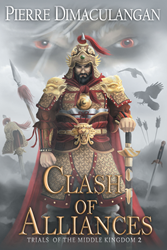 Following the exciting and suspenseful events of the first book "The Sage the Swordsman and the Scholars", Pierre Dimaculangan has completed his new book “Clash of Alliances: Trials of the Middle Kingdom 2”: a gripping and potent story of war, espionage, and the struggle against a threat that would upheave the entire world.

Pierre Dimaculangan was born in the heart of Manila and spent most of his childhood in Queens, New York. Aside from being a digital artist and designer, he combined his love of writing and history to write books. He plays video games, trains parkour, and practices martial arts in his spare time.

Published by New York City-based Page Publishing, Pierre Dimaculangan’s unique and creative tale follows main character Sun Xin on a clandestine endeavor to uncover the plots crafted by the reemerging enemies of the Ming Dynasty. As these enemies coalesce and grow under the banner of the formidable Terukk race, the threat to the people of the Ming Empire grows imminent.

The Ming Empire scrambles to prepare for war as the resurging clans of the Underworld form alliances. These clans of the Underworld make maneuvers to overthrow the dynasty in the name of a powerful and mysterious race of nonhuman foreigners called Terukk. The knight-errant Sun Xin, known as the Wandering Wolf, embarks on another harrowing operation with his motley team to discover their enemies’ plans. Attaining the enemy’s war strategy may just buy the Ming Empire enough time to muster her defenses for the massive Terukk invasion force.

At the same time, the Ming Dynasty’s emperor is compelled to form his own alliances with ancient enemies and rival kingdoms if there is to be any hope of survival. This is the story of the great clash of alliances where legendary factions, powerful armies, and bitter rivals fight to the death for the creation of a new world or for the restoration and preservation of the old one.

Readers who wish to experience this gripping work can purchase “Clash of Alliances: Trials of the Middle Kingdom 2” at bookstores everywhere, or online at the Apple iTunes store, Amazon, Kobo, Google Play or Barnes and Noble.