Seventh year of grantmaking brings support to date over $5.37 million 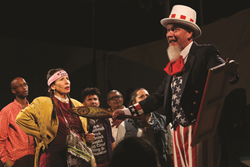 We are proud to support this group of visionary artists

The New England Foundation for the Arts announces $630,000 in six new grants during the seventh year of the National Theater Project. NTP supports the development and touring of new theater works.

The National Theater Project (NTP) promotes the development and touring of artist-led, ensemble, and devised theater works. Modeled on NEFA’s National Dance Project, NTP functions as a full system of support for devised theater, which in addition to funding animates an informed, interactive network of producing theaters, presenters, and ensembles.

Since the first round of NTP grants in 2010, NEFA has infused over $5 million into the field through the program. To date, 57 new theater works have been supported; touring of those works has reached 42 different states across the U.S. NTP projects have toured to large and small arts presenters, military bases, universities, regional theaters, and festivals. Leadership support for NEFA’s National Theater Project is generously provided by the Andrew W. Mellon Foundation.

“We are proud to support this group of visionary artists, and appreciate our long partnership with the Andrew W. Mellon Foundation, which enables NEFA to support both artistic creation and the touring of new work in communities across the United States,” said NEFA executive director Cathy Edwards.

Grants for this round ranged from $90,000-$125,000. In addition to the Creation and Touring grant, each recipient will also receive $10,000 towards capacity building for touring the project. The six grant recipients are:

“I am so excited about this cohort of grantees whose projects address issues of identity, incarceration, gentrification, climate change, and racism,” said Quita Sullivan, program director for theater at NEFA. “The breadth and depth of these projects is breathtaking!”

Organizations interested in presenting any of these works – or works from previous grant rounds – may apply for an NTP Presentation Grant after contacting its tour coordinator; learn about all the projects with NTP touring support available on a searchable directory on http://www.nefa.org. NTP also provides travel support for arts presenters interested in seeing projects. Contact program director Quita Sullivan at qsullivan(at)nefa(dot)org or 617.951.0010 x531 to learn more.

About NEFA
The New England Foundation for the Arts invests in the arts to enrich communities in New England and beyond. NEFA accomplishes this by granting funds to artists and cultural organizations; connecting them to each other and their audiences; and analyzing their economic contributions. NEFA serves as a regional partner for the National Endowment for the Arts, New England’s state arts agencies, and private foundations. Learn more at http://www.nefa.org.