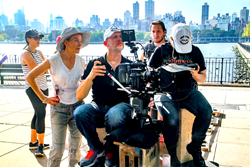 I am very proud that young people all over the city will see our film and engage in conversations about freedom of speech–Blanche Baker.

“Streetwrite” uses street art as a focal point to examine the various ways people struggle to express themselves in situations where free speech is curtailed or suppressed. It also explores how certain kinds of expression can be repressive to individuals.

"I am very proud that young people all over the city will see our film and engage in conversations about freedom of speech,” says Blanche Baker.

The film was fully funded by the New York Film Academy, with an international cast of talented Musical Theater Program students working alongside NYFA’s professional faculty of artists.

“We are the only school in the world offering the opportunity to create an original movie musical. The education experience in the NYFA Musical Theatre Program is unsurpassed,” states NYFA Senior Executive Vice President, David Klein.

With locations all around the world, the New York Film Academy (NYFA) has grown into an international film and performing arts school with a focus on learning by doing, providing its students with hands-on instruction.

The New York Film Academy’s Florence, Italy, location holds film and acting programs in a renovated renaissance era building, across the street from Le Cappelle Medici, moments away from the Duomo. Steven Spielberg, Martin Scorsese, Bruce Springsteen, Al Pacino, Robert Downey Jr., Kevin James, Jamie Foxx, and Jodie Foster are among the many figures in the film industry that have sent their family members to study at the New York Film Academy. For more information, please visit nyfa.edu.

About The New York Public Library:

The New York Public Library is a free provider of education and information for the people of New York and beyond. With 92 locations—including research and branch libraries—throughout the Bronx, Manhattan, and Staten Island, the Library offers free materials, computer access, classes, exhibitions, programming and more to everyone from toddlers to scholars, and has seen record numbers of attendance and circulation in recent years. The New York Public Library serves more than 18 million patrons who come through its doors annually and millions more around the globe who use its resources at http://www.nypl.org. To offer this wide array of free programming, The New York Public Library relies on both public and private funding. Learn more about how to support the Library at nypl.org/support.

A veteran actor of stage and screen, Baker first made her television debut in the miniseries “Holocaust,” for which she won an Emmy Award, and went on to appear in numerous other television movies and series, including the recent HBO film “Taking Chance.” She is also well-known for her turn in the classic film “Sixteen Candles,” and for her Broadway debut in 1980 in the title role of Edward Albee’s adaptation of “Lolita.”