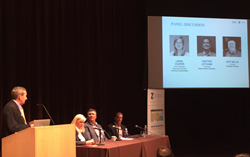 "Meyers Research forecast events helping to support the end of homelessness a labor of love."

HomeAid America is a major national building industry charity and one of the largest builders of housing for the homeless in the country. For the past three years, it has also been the beneficiary of the generosity of Meyers Research, a Kennedy Wilson Company, one of its top national partners.

Meyers Research has been holding housing forecast events to benefit HomeAid America for over three years. The recent event in Denver held on July 19th was the 10th such forecast event, and including an additional event held by its parent company Kennedy Wilson to launch HomeAid’s LA chapter, the company has now raised $500,000 through ticket sales and sponsorships for the homelessness charity. Jeff Meyers, President of Meyers Research and HomeAid America Board member said, “It’s important to our team to champion a cause greater than ourselves. Our partnership with HomeAid allows us to make a difference in the fight to combat homelessness. We are thrilled to reach the $500,000 mark.”

The Meyers Research forecast events started in Orange County CA in January 2014 as a way for the company to make an on-going contribution to HomeAid and also help the charity spread the word on its work throughout the industry. The events proved to be incredible successes, with subsequent events held in Las Vegas, Northern Virginia, Atlanta, and Denver. Orange County completed its 4th annual event this past March. In total, approximately 1,800 people have attended these events with the proceeds from the ticket sales as well as sponsorships all being donated to HomeAid.

HomeAid America CEO Peter Simons said, “What started as a singular effort to help support our cause of ending homelessness has turned into a real mission, and a labor of love on behalf of the entire Meyers and Kennedy Wilson organizations. Jeff Meyers’ personal service on our Board of Directors further enhances and deepens this bond. HomeAid and Meyers Research have been a great team and are making a difference together.”

HomeAid was founded by the building industry in 1989 as a way to give back to the community by addressing the issue of homelessness. According to the National Law Center on Homelessness, each year over 3.5 million Americans experienced homelessness at some point. Nearly 1.5 million of them were children. HomeAid’s program identifies charities in the community working to help the homeless that need additional facilities in which to house people and provide programmatic resources such as job skills training and financial counseling, as well as physical and emotional support. HomeAid then finds builders who are willing to take on these projects and build them at a deep discount by enlisting their trade partners to give their time and materials as in-kind donations.

HomeAid is a leading national non-profit provider of housing for homeless families and individuals, founded in Southern California in 1989. Through the generosity of builders, their trades and their suppliers, HomeAid has completed over 500 housing projects nationwide at a value of more than $220 million, of which nearly 50 percent has been donated by the building industry. HomeAid currently has 60 additional projects in development across the country. Over the years, HomeAid has added nearly 9,300 beds in facilities helping the homeless, housing over 280,000 people. HomeAid works through a network of 17 active chapters in 12 states across the country. For more information about HomeAid, call 1-888-3HOMEAID, visit http://www.homeaid.org or follow on http://www.facebook.com/homeaidamerica.

Meyers Research, a Kennedy Wilson Company combines experienced real estate and technology advisors with leading data to provide its clients with a clear perspective and a strategic path forward. Based in Beverly Hills, California, Meyers is home to 150 experts in 10 offices across the country.