Global Language Service provider thebigword has announced ambitious plans to grow the business and enter the top 5 language companies in the world. 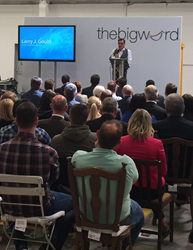 I don’t believe there has ever been such an exciting time for the company.

Global Language Service provider thebigword has announced ambitious plans to grow the business and enter the top 5 language companies in the world.

The ability to deliver a quality service at speed is absolutely essential to this goal and so thebigword has invested £7million in technology over the last three years.

The company has already achieved amazing results. In the year ending May 2017 turnover had grown by 40 per cent from £42million to £60million.

Speaking at thebigwords’ annual conference at its Leeds headquarters, thebigword Chief Executive Larry Gould outlined a three pronged strategy which will see the company grow to a run rate of £120m in the next 18 months.

thebigword strategy for continual growth includes continuing investment in Technology and the launch of a new Language App: Wordsynk. This technology will allow thebigword to capture areas of the market that have been harder to reach such as SME’s and even individuals.

Acquisition of other Language Service Providers is also a key plank of the company’s growth strategy and the company will be seeking to expand in both the US and Asia as well as Europe.

thebigword also aims to grow in markets where it is already successful in one geography but not another such as Defense.

Founder and CEO at thebigword Larry Gould Said: “In all the time since I have been at thebigword I don’t believe there has ever been such an exciting time for the company.

“At this moment we are in the top 20 Language companies in the world which in itself is a fantastic achievement, but our ambition in the next 5 years is to be in the top 5.

“To do this we’re going to fundraise. This will enable us to do two things: spend more on Technology and also to buy other companies, so we’re not just growing organically.”