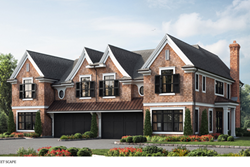 We are very pleased with our robust deal pipeline and the reputation we have earned as a premiere non-bank lender in this lending environment, whereby banks are continuing to struggle with regulatory constraints.

The largest of the three financings was a $15.0 million first mortgage acquisition loan secured by three industrial buildings in the East Williamsburg section of New York City with an existing “as of right” to build a residential development containing approximately 103,500 square feet. The property is a prime development site that was acquired for $28 million. Knighthead’s loan was provided to meet a time of the essence closing.

Knighthead also provided an $8.5 million first mortgage secured by a site in Irvington, NY measuring 5.80 acres which is fully approved for a 27-unit townhome development. The property is in a highly desirable bedroom community on the Hudson River with easy commuting distance to New York City and to local employment. Downtown Irvington contains an eclectic mix of boutique shops, sidewalk cafes and other independently-owned businesses housed in historic buildings. With a top public school system, Irvington is one of the most sought after towns for young families moving out of Brooklyn and Manhattan.

Commenting on this loan origination, Jonathan Daniel, Principal of Knighthead Funding, said, "The borrower in this project spent over a year to receive all the approvals for this outstanding project. We structured the loan so they could acquire the remaining piece of the site needed to complete the approved subdivision."

The third debt financing was a $6.5 million first mortgage construction loan to redevelop an existing one-story commercial building in the Hell's Kitchen neighborhood of New York City into an as-of-right, four-story, 12,660 square foot mixed-use building containing office space over retail. Upon completion, the property will contain approximately 10,000 sf of new state of the art office space which will be highly desirable for tech companies or other creative tenants. This property is located on 11th Avenue, approximately 10 blocks north of Hudson Yards and is surrounded by newly constructed multifamily high-rise developments.

Stated Mr. Daniel about this deal, "The Borrower needed a lender to facilitate the construction of 3.5 stories on top of an existing retail structure...With banks largely avoiding construction loans, Knighthead was an ideal fit to finance this project.”

Commenting on the transaction velocity experienced by Knighthead Capital, Mr. Daniel said, "We are very pleased with our robust deal pipeline and the reputation we have earned as a premiere non-bank lender in this lending environment, whereby banks are continuing to struggle with regulatory constraints."

About Knighthead Funding, LLC
Knighthead is a real estate finance company specializing in bridge loans and other alternative debt financing to meet capital needs in a variety of unique and special situations secured by a broad range of real estate assets. Since 2013, Knighthead has earned an exceptional reputation for funding complex and situational real estate transactions in a timely manner with flexibility and certainty of execution. Currently, Knighthead is originating loans and investments for its second discretionary real estate debt fund.