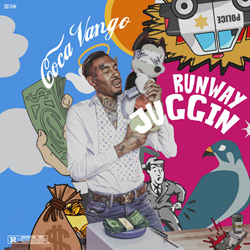 Georgia artist Coca Vango is back with his new mixtape “Runway Juggin". Vango is just coming off the success from his previous project, “Cocaine Flow 2”, which he released back in late 2016. "Runway Juggin" is currently available to stream and download through Coast 2 Coast Mixtapes, as well as on Datpiff, iTunes, Spotify, and all other streaming services.

This time Vango takes it up even more as he’s on the brink of higher success coming out of Black Hollywood. “Runway Juggin” consists of 8 tracks featuring production from TrellGotWings, Zone 36, AP The Beat, Martian, and others. The project also features performances from Jazze Pha, Asian Doll and VL Deck from Duct Tape.

"Runway Juggin" starts off upbeat setting the tone until the end. Working with Zone 36, fans can hear Vango really take it next level with that Atlanta flow outside of the trap scene. Clicking with AP The Beat Martian on “ASAP Rocky Cocky” exhilarates the sound in which many know of him from previous projects.