The machine-learning solutions provider is joined by prominent leadership as the company releases its advanced cyber defense solution, NitroDefender™. 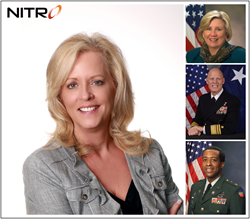 Nitro Solutions today announced an expansion of its leadership team and formation of a strategic advisory board, adding notable members who bring a wealth of technology knowledge, defense intelligence expertise and executive leadership to the company.

Nitro has appointed Lisa Monnet, serial entrepreneur as its new chief executive officer, effective immediately. Pete Slade will assume the role of chief technology officer, and maintain his role as president of the company.

“I am tremendously excited to have Lisa Monnet join Nitro as our next chief executive officer,” Slade said. “As we release our cybersecurity solution, NitroDefender™, it’s imperative that our leadership not only have deep roots in technology and the Intelligence Community, but the capability to succeed in a rapidly changing sector. We’ve selected a strong and proven-effective leader that can help us carry out growth initiatives, create international relationships, raise capital and execute on vision and strategy as we enter this new stage of our business, which I have no doubt will be even more impactful than our last.”

Prior to joining Nitro Solutions, Monnet served as a senior advisor providing multidiscipline support to the Intelligence Community and Department of Defense worldwide. She was responsible for the oversight of international special project operations, including global support to intelligence consumers in operational, technical, geospatial and analytical domains. Monnet has founded numerous successful startups within the general aviation and technology industry.

“I’m thrilled to join Nitro,” Monnet said. “The possibilities are endless with the technology this team creates. When I learned about NitroDefender™, I instantly saw the opportunity to penetrate several markets, to include the Department of Defense. NitroDefender’s artificial intelligence, machine learning and unsupervised deep neural networks self-learn the normal behaviors of people and devices. It can discover indicators of zero-day exploits, malware, ransomware, phishing, malicious insider activity and other cyber threats in real time across physical, virtual and cloud-based networks. The technology Nitro delivers is unparalleled, and I’m honored to lead this incredible company."

Additionally, Nitro is pleased to announce the formation of its advisory board, with the initial appointment of three noteworthy defense and intelligence industry veterans. Leveraging the knowledge of these industry experts and decorated professionals drastically expands Nitro’s capabilities, and is critical to driving the company’s strategic initiatives. The additions to Nitro’s board include:

Carol A. Haave – Mrs. Haave has served as Deputy Under Secretary of Defense Counterintelligence and Security, Assistant Secretary for International Affairs at Department of Homeland Security, and Deputy Assistant Secretary of Defense for Security and Information Operations. She maintains significant international contacts, with cabinet-level officials providing defense, security, intelligence, counterintelligence and technology advice. She has served as a management analyst at NASA and has over 15 years experience consulting to the Defense Advanced Research Projects Agency (DARPA).

Colonel Foster Payne – Colonel Payne is a senior defense industry executive with 37 years of experience in the Department of Defense and Private Industry Sectors. He has a broad and in-depth understanding of the Intelligence Community and working in collaborative network environments. He is a decorated combat veteran who served in the U.S. Army for more than 27 years.

The advisory board will work with Nitro to navigate both commercial and defense industries, and collaborate on strategic direction as the company raises capital to fuel growth and international expansion.

NitroDefender™ will be available for purchase through Nitro’s channel partners. Initial efforts are focused on the United States, with international expansion expected in 2019.

About Nitro Solutions:
Nitro Solutions is the first company to apply unsupervised deep neural networks to cybersecurity, improving the way commercial industries and government agencies combat cyber threats with NitroDefender™. With its advanced, multi-engine approach to cyber defense, Nitro delivers next-generation threat identification, accelerated response and threat prevention capabilities that help make the world a safer place. Founded in 2009 by machine-learning experts, Nitro is a woman owned small business, whose innovative technology has earned it titles such as “Technology Company of the Year” by the Tampa Bay Technology Forum. Nitro has also been recognized as a member of the Inc. 500 for its exceptional growth, and twice named one of the top small businesses in the nation by the U.S. Chamber of the Commerce. To learn more, visit nitrosolutions.com