The release date of Meadow Williams latest movie, Den of Thieves, is January 19, 2018 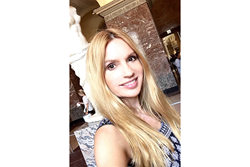 I’m so excited for the film’s release. I think the viewers are really going to enjoy it.

Meadow Williams, actress, screenwriter, and producer, recently announced the release date of her latest movie, Den of Thieves, is January 19, 2018. Filming began in January 2017, and the wrap party was April 9. It was directed by Christian Gudegast, who also co-wrote the original story this screenplay was modeled after. The producers are Mark Canton, Tucker Tooley, Gerard Butler, and Alan Siegel.

Acting in her 19th film, Meadow plays Holly, working alongside Gerard Butler, Pablo Schreiber, O’Shea Jackson, Jr., Curtis “50 Cent” Jackson, and more. “I’m so excited for the film’s release. I think the viewers are really going to enjoy it,” said Meadow. “I know I enjoyed filming it.”

Den of Thieves is an action thriller about a group of gang members who set out to rob the Federal Reserve Bank in downtown Los Angeles. The story follows the gang members lives as they go up against an elite group of Los Angeles law enforcement officers (including Butler). Some are describing the movie as a crime saga that’s similar to Heat. Diamond Film Productions and STXfilms co-financed the film, and it will be distributed around the world.

Meadow talked about her fellow actors and the crew. “They were all fabulous. It was like working with a happy family. We had so much fun. And the makeup team was phenomenal. I couldn’t ask for a better group.”

To learn more about Meadow Williams, check out her website, http://www.meadowwilliams.com. And keep checking back for more information about Den of Thieves.