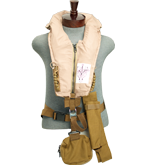 The LPU-41/P life preserver was previously selected by the Marine Corps Systems Command to provide waterborne Egress Capabilities in the event of a rapidly sinking AAV. The 2017 contract follows a 2016 contract for an original order of 5,000 units.

The LPU-41/P is capable of providing 65 pounds of buoyancy at the surface, and 30 pounds of buoyancy at 33 feet below the surface of the water, while also providing a supplementary emergency breathing device should a Marine need to egress a submerged AAV. It is designed to be compatible with varying gear and includes a holster for an emergency breathing device.

The LPU-41 life preserver is among a number of life preservers Switlik offers for the military along with life rafts, anti-exposure suits and accessories, and anti-gravity garments.

Established in 1920, Switlik has been owned and operated by the Switlik family for four generations and is known worldwide as a manufacturer of the highest quality sewn and heat sealed inflatable safety and survival products for the aviation, marine, and military markets.