Tom Jennings's Book "Memoirs of a Failure - the Hollywood Self-Induced Lynching" is a Hilarious, yet Poignant Memoir of a Hollywood Casting Director and Cautionary Tale

Recent release “Memoirs of a Failure - The Hollywood Self-Induced Lynching” from Page Publishing author Tom Jennings is the autobiography of a former Hollywood casting director and talent agent, whose personal demons and their effects on his life offer a cautionary and, as Julian Fellowes says, “hilarious” tale about the pitfalls of hubris and advice on how to avoid succumbing to them. 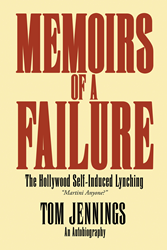 Author Tom Jennings, a resident of the American Northwest, has completed his new book “Memoirs of a Failure - The Hollywood Self-Induced Lynching”: a potent and humorous autobiography of a young man on the fast track to mind-blowing success in 1969 brought down by indulgent afternoons during which his once-promising career slipped further and further from his grasp.

Alcohol-fueled business deals unraveled at an alarming rate. The Hobbit, Batman, The Blues Brothers, Red Star Over China, Norton and Ali, King Tut, Blitz, Dracula and several others fell through the cracks and became missed opportunities later championed by others.

The movers and shakers of the time would have made them happen; Jennings and his partner had them first, but were too busy figuring things out over cocktails at The Rangoon Racket Club, or The Polo Lounge.

Worst of all was the chronic illness of his youngest son, Hugo, who developed epilepsy, which changed his life completely as well as his dad’s.

In 1969 Jennings was on the fast track. In 1993, he was by himself living in his brother’s fourteen-foot duck hunting trailer.

What went wrong? This book answers that question.

Published by New York City-based Page Publishing, Tom Jennings’s cautionary tale offers a glimpse of the life of a Hollywood casting director and talent agent and a warning that nothing in life is guaranteed.

Readers who wish to experience this potent work can purchase “Memoirs of a Failure - The Hollywood Self-Induced Lynching” at bookstores everywhere, or online at the Apple iTunes store, Amazon, Google Play or Barnes and Noble.