Mixed reactions as business goes to payment by credit and debit only. 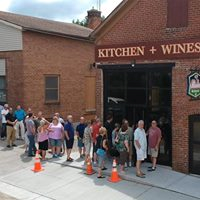 Ms. Manjit Minhas, owner of the newly added Minhas Kitchen + Wine + Spirits (MKWS) announced today that effective immediately, the establishment has gone cashless and that it will only take credit and debit cards. She also added that, to the best of her knowledge, hers is the first and only establishment of its kind that has gone cashless in this region of the Midwest.

Ms. Minhas said that since its opening 2 weeks ago. MKWS has had an unbelievable response from the customers and that things were “crazy busy” with long lineups and she has had to turn away customers. She added that this was a necessary move in order to maintain the quality of food and service. It simplifies the operations as the staff do not have to deal with cash and that going cashless was safer for the overworked staff as well as safer for the community in general.

The Minhas Brewery, Distillery and Winery Tour Centers and the gift shops will continue to take cash as well as credit cards. It should be noted that the Minhas Brewery restaurant in Calgary Alberta Canada has been cashless for 5 years.

Although, this move has not affected her business so far, Ms. Minhas will continue to monitor the situation closely.

About Minhas Kitchen + Wine + Spirits (MKSW): Based in Monroe WI, MKSW opened on July 16, 2017 with much fanfare, and offers Affordable Fine Dining paired with 35 award winning wines and spirits, produced right in Monroe by Minhas Winery and Distillery. MKWS is located across from the second oldest brewery in the nation (Minhas Brewery) in the historic and beautiful downtown Monroe. It is housed in a 150 years old building, the oldest in the Green County, it offers historic charms with modern touches including an outdoor Wine Garden.
For further inquiries, please contact Ms. Manjit Minhas at info(at)MinhasKitchen.com. Website http://www.MinhasKitchen.com