All Female Entrepreneurs, Executives and Employees Worldwide Are Eligible 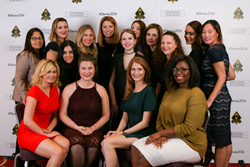 The 2017 Stevie Awards for Women in Business are accepting nominations.

All female entrepreneurs, executives, employees and the organizations they run, worldwide, are eligible to be nominated.

The Stevie® Awards, organizer of the world’s premier business awards programs, has issued the call for entries for its 2017 (14th annual) Stevie Awards for Women in Business. Entry kits and complete details on the competition are available at http://www.StevieAwards.com/Women.

The Stevie Awards for Women in Business honor the achievements of working women in more than 85 categories, including: Best Entrepreneur, Best Executive, Mentor or Coach of the Year, Lifetime Achievement Award, Women Helping Women, Employee of the Year, Woman-Owned or -Run Company of the Year and Innovator of the Year. All female entrepreneurs, executives, employees and the organizations they run, worldwide, are eligible to be nominated.

The final entry deadline is August 23, but late entries will be accepted through September 20 with payment of a late fee. Finalists will be announced on October 4, and the Gold, Silver and Bronze Stevie winners will be revealed at a gala awards dinner at the Marriott Marquis Hotel in New York on November 17, 2017.

Niamh Barker, founder and managing director of The Travelwrap Company in the UK, commented on the impact of her win. “Winning the Stevie Award was an enormous achievement for me and my business and continues to prove beneficial to our operations every day. I had no idea of the impact that winning this award would have on our business until I checked my email from my hotel room the next morning and online orders had flooded in from across the USA. We now have a growing and loyal customer base in America via online and retail outlets. The Stevie Awards have definitely helped elevate our U.S. presence.”

Winners of the 2016 Stevie Awards for Women in Business include, among others:

The 2016 Gold, Silver and Bronze Stevie Award winners reflected a diverse group of large and small organizations around the globe. The 2017 Stevie Awards for Women in Business will be judged by more than 200 leading professionals around the world, and nominees will have access to all of the judges’ comments and suggestions about their nominations: an invaluable resource.