Adolfson & Peterson Construction (AP) broke ground on the Aurora Central Recreation Center. The 20-acre site will be developed to include a new 2-story, 60,000-sf recreation center. 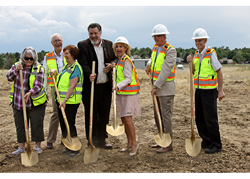 Funded through marijuana tax revenue, this new recreation center will be a major addition to the parks and recreation amenities for Aurora residents.

The 20-acre site will be developed to include a new 2-story, 60,000-sf recreation center. It will include an aquatics area, gymnasium, an elevated walking/jogging track and fitness area. It will also include a teaching kitchen, party rooms, multi-purpose rooms, group exercise rooms, offices and locker rooms.

The project is set to be opened by Christmas of 2018.