Recent release “The Baja Expatriate: El Gringo y La Puta” from Page Publishing author Edwin Paul is a gripping romance between a world-weary lawyer from the US and a Tijuana prostitute under the control of a ruthless and brutal pimp. 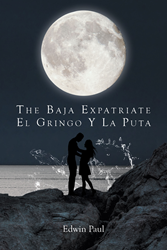 Middle-aged Troy Banalia is a burned-out lawyer from South Jersey who vacations in Baja California where he is entertained by the professional women of Tijuana. He samples the wares of many ladies of the night until he meets the blonde bombshell Angelita. The sexual passion between them ignites immediately, and he soon falls madly in love with her as does she for him. When he returns to his law practice, a duplicitous client sells him out by telling the assistant district attorney a bunch of lies, which implicate Troy, in exchange for leniency. The beloved barrister becomes disbarred and is imprisoned. While serving a brief sentence, the broken Banalia decides to leave his former life behind and vows to return to Angelita and free her from the evil Hector, a.k.a. Solo, Lobo, her pimp.

When he finds Angelita, the struggle between Troy and his armed entourage - the fearless private investigator Gary Brody and brave Mexican guide Jose Bravo - and the brutal gang of Solo Lobo begins. Fueled by the backup of Brody and apt tutelage of Jose, Troy devises a series of plans to conquer Lobo once and for all and free Angelita forever. His affection for and friendship with his amigo nuevo grows during this learning process until his crestfallen companion eventually confides in him regarding the dark secret of why this honorable Mexican hombre is called El Bravo by those who know him.

The battles for Angelita between the two warring camps commence at the top of Baja in this first novel, and continue south throughout the rest of the elongated peninsula to its inevitable end at the twin capes, Cabo San Lucas and San José del Cabo, in the sequel, Land’s End, Cabo. Along the way from Tijuana to Los Cabos, Troy drives with Angelita always by his side in their desperate trip of escape. The surreal landscapes abound during their journey across this magical land. And all the adventure takes place against the background of beauty that prevails in this pristine peninsula. An ode to Baja so to speak. The unexpected and perilous predicaments that transpire on this spectacular sojourn will test the fullest measure of their collective resolve and spiritual union.

Readers who wish to experience this engrossing work can purchase “The Baja Expatriate: El Gringo y La Puta” at bookstores everywhere, or online at the Apple iTunes store, Amazon, Google Play or Barnes and Noble.

Page Publishing is a traditional New York-based full-service publishing house that handles all the intricacies involved in publishing its authors’ books, including distribution in the world’s largest retail outlets and royalty generation. Page Publishing knows that authors need to be free to create - not bogged down with the logistics eBook conversion, establishing wholesale accounts, insurance, shipping, taxes, and the like. Its roster of accomplished authors and publishing professionals allow writers to leave behind these tedious and time-consuming issues and focus on their passion: writing and creating. Learn more at http://www.pagepublishing.com.