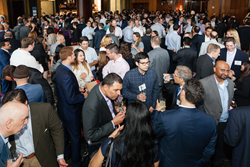 More than 400 attendees gathered for the 2017 Summer Social on Wednesday, July 26th, at Ascent Lounge in the Time Warner Building, in celebration of event-host CFA Society New York’s milestone 80th year as the leading forum for the investment management community.

1) Strategic Initiatives: Delivering Member Value
CFA Society New York received this global award for providing compelling value on a consistent basis to all members across our vibrant member community. NYSSA’s membership grew to 10,000 during the period.

2) Research Foundation Society Award: Events/Activities
CFA Society New York was chosen by CFA Institute Research Foundation to receive this award based on our robust calendar of informative and educational events. We host over over 70 seminars per year while also offering numerous member-exclusive forums organized according to member interests. During the period, we also hosted the 50th anniversary celebration of the Research Foundation itself.  At this celebration Frank Fabozzi was presented with the JAMES R. VERTIN AWARD.

3) Inaugural Global Outstanding Young Leader: Thomas Brigandi
Tom was chosen as the inaugural recipient of this global award for his prolific work at CFA Society New York. He has built a team of over 200 volunteers who regularly organize events from an independent and objective perspective. The most successful of these is the ASSET OWNER SERIES, which hosts Chief Investment Officers from each segment of the Asset Owner universe.

Brigandi was additionally honored for organizing a record-setting 50 events as a Society volunteer and received an award on behalf of the Society from Mr. Yoon, who cited Tom’s record-setting volunteer achievements of organizing 50 events featuring over 350 speakers that directly and collectively oversee in excess of thirty trillion USD in assets under management and in advisory. Cumulatively the 50 events Tom organized were attended by over 9,300 investment professionals.

For a a full list and more information on CFA Institute’s Volunteer of the Year Award 2017 Winners, click here: https://connexions.cfainstitute.org/volunteers-of-the-year

CFA Society New York has been a leading forum for the investment community since 1937. That year, a small group of security analysts decided to turn their casual lunch gatherings into a series of regular meetings. They held an organizational luncheon in a private dining room of the New York Chamber of Commerce. It was there that CFA Society New York was conceived, with a membership of approximately 20 analysts, including Benjamin Graham, the “father of securities analysis” and one of the most influential men in the history of finance. In September of that year, the Society held its first formal program, at which Lawrence Klybert of Alexander Eisemann & Co. spoke on “Options – Their Effect on the Market Price of Stocks.” By 1939, the Society had grown to 82 members. Today, with more 10,000 members, CFA Society New York is the largest member society of the more than 148 societies comprising CFA INSTITUTE worldwide. For more information, visit https://www.NYSSA.ORG.