Dr. David Samadi provides his expert opinion on a recent study regarding safety of active surveillance for men with intermediate-risk prostate cancer. 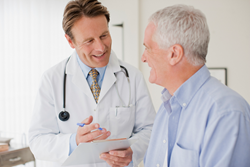 If at any time a man is uncomfortable with active surveillance, he should express that concern as we can together agree on which treatment method is best for him

A recent cohort study from Harvard Medical School published in European Urology Focus found nearly one in three men with Gleason 3 + 4 favorable intermediate-risk (FIR) prostate cancer (PCa) after having had a radical prostatectomy harbored a higher grade or stage of the disease than previously thought raising concerns about the safety of managing PCa with active surveillance (AS).

“Active surveillance has been an option for monitoring cancer closely with the goal to allow a man to have the highest quality of life while delaying or possibly even completely avoiding invasive treatments,’ said Dr. David Samadi. “It can certainly be a viable method for monitoring men with prostate cancer that falls into the category of being low-grade or is considered to be very slow growing and not likely to spread. This study, however, found that some men who fall into this category may be concealing worse disease than what their prostate biopsy or clinical exam may be showing, meaning active surveillance may not be appropriate for them.”

The objective of this study was to examine the incidence and predictor of upgrading and upstaging among men with Gleason 3 + 4 FIR disease since it was unknown whether the active surveillance was always a safe option for patients with this stage of PCa. Using the National Cancer Database, the researchers studied more than 10,000 men diagnosed during 2010-2012 with Gleason 3 +4 tumors, with a prostate specific antigen (PSA) below 10 ng/mL, and CT1c-2c PCa with fewer than 50% positive biopsy cores who underwent radical prostatectomy.

“What the researchers found was that 30.3% of men with a Gleason score of 3 + 4 favorable intermediate-risk prostate cancer harbored advanced disease of a higher grade or stage,” explained Dr. Samadi. “The current guideline from the American Society of Clinical Oncology endorses the use of AS for select patients with low-volume Gleason 3 + 4 disease. What these findings suggest is that older men with a Gleason 3 + 4 FIR disease and who have a high PSA, a high percentage of positive biopsy cores and or a cT2a stage cancer would not be good candidates for active surveillance. The study found that with these combined factors, they were able to identify groups of men whose risk of upgrading or upstaging ranged from just over 20% to nearly 50%. According to this study, active surveillance would not be a method of treatment I would feel comfortable in recommending unless their life expectancy is already low.”

From the study, the researchers stated the strongest predictors of upgrading and upstaging were PSA and percentage positive biopsy cores. The reason for this was that the risk of upgrading or upstaging increased from 21.7% for patients with fewer than 12.5% positive cores and PSA level of 4.0 ng/mL or below to 44.3% for men with 37.5%-49.9% positive cores and a PSA level of 8.1-9.9 ng/mL.

“Men who are good candidates for active surveillance are younger patients with a low PSA, low percentage of positive cores, and cT1c tumors as they have a 20% risk of a more progressive disease,” explained Dr. Samadi. “They would still require close monitoring and follow-ups involving regular PSA measurements, repeat biopsies, and other means of therapy such as magnetic resonance imaging of the prostate if there are concerns of growing cancer.”

Dr. Samadi went on to add, “Men with prostate cancer who are being treated with active surveillance, are seen on a regular basis in which I am checking and evaluating the tumor for any signs of change. If I discover changes are occurring such as a rise in a man’s PSA level or Gleason score, then I would recommend stopping active surveillance and begin another form of treatment based on my findings. My goal is to determine if active surveillance is the right treatment for each man I see. As long as the cancer is confined to the prostate and does not appear to be aggressive, it can be advantageous as it can help delay or avoid potential side effects of surgery or radiation therapy. However, if at any time a man is uncomfortable with active surveillance, he should express that concern as we can together agree on which treatment method is best for him.”