Rod Farrow, co-owner of Fish Creek Orchards in Waterport, NY, has been named the 2017 Apple Grower of the YearSM by American Fruit Grower® and Western Fruit Grower® magazines, published by Meister Media Worldwide. Farrow will receive his award during the USApple Outlook and Marketing Conference, August 24, in Chicago, IL. 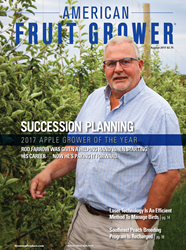 Rod Farrow, co-owner of Fish Creek Orchards in Waterport, NY, has been named the 2017 Apple Grower of the YearSM by American Fruit Grower® and Western Fruit Grower® magazines, published by Meister Media Worldwide. Farrow will receive his award during the USApple Outlook and Marketing Conference, August 24, in Chicago, IL.

The Apple Grower of the Year award program, sponsored by Valent U.S.A., honors apple growers who have gone beyond the confines of the orchard and have, through their involvement and leadership, made a real impact on the apple industry.

Farrow was honored for developing a creative succession plan so the farm will continue to flourish, leading volunteer grower organizations, and hosting numerous trials to boost the knowledge level for all growers in the apple industry.

Farrow is well-known in the industry for encouraging fellow growers to adopt modern, high-density, intensively farmed orchards. He is currently president of the prestigious International Fruit Tree Association and has hosted countless Cornell University research trials.

Mark Mason, Tree Fruit Crop Manager at Valent U.S.A. — the award sponsor — says he finds Farrow to be an inspiration. “The Apple Grower of the Year celebrates the tenacious spirit of the American apple industry today and tomorrow,” Mason says. “Growers face a host of challenges every day. It’s growers like Rod Farrow who face these challenges head-on, look for proactive solutions and inspire the rest of us to do the same.”

Farrow is a first-generation apple grower, and the first honoree to be born outside the U.S. Growing up in England, he decided on a career in fruit growing, and did internships in France, Japan, and New Zealand, in addition to the U.S. In this country, he was fortunate to live and work with the family of George Lamont.

Besides being a big believer in sharing horticultural knowledge freely across the globe, Lamont was the 1997 Apple Grower of the Year. That makes Lamont Fruit Farm, now called Fish Creek Orchards, the only farm to be operated by two honorees — exactly two decades apart.

Lamont’s own children were not interested in following in their father’s footsteps, so he and his brother worked with Farrow to develop a plan so the ambitious Brit could eventually succeed them. It worked so well that two decades later, when Farrow’s own children said they weren’t interested in farming, Farrow developed a similar strategy. Two young go-getters who initially worked for him, Jason Woodworth and Jose Iniguez — the latter having started as a picker — are now his partners.

“It's a great honor to be the Grower of the Year and receive such a prestigious award. It's also very humbling to see yourself on a list of previous winners that includes the likes of Grady Auvil and Bill Zirkle,” Farrow says. “Individuals usually receive the award but teams earn it. I am very proud of the amazing team we have put together on the farm over the last 15 years, from my wife Karyn to partners Jose and Jason all the way through to our full-time and H-2A employees. Everyone on the farm contributes to the vision we have and they are the reason for our past, present, and hopefully future success.”

Jim Bair, President & CEO, USApple, salutes Farrow for being self-made. “Most apple growers were born to it, but Rod wasn’t. He chose growing apples as his career, and that passion shows in everything he does,” he says. “Because he had influential mentors along the way, he pays it forward by sharing every bit of technical knowledge he’s learned. The apple industry is richer for his generosity.”

"A member of the award selection committee, David Eddy, Editor of American Fruit Grower and Western Fruit Grower, notes Farrow received by far the most nominations of any grower in the country.

“It is with great pleasure we honor Rod Farrow, a fine horticulturist and industry leader, as Apple Grower of the Year,” he says. “He — as did his mentor, George Lamont — has shown fellow growers how they can give a helping hand to the next generation, helping ensure their farms will continue to succeed for decades to come.”