True West magazine has once again named the Buffalo Bill Center of the West its Top Western Museum. The Center received top museum honors in 2015 as well. 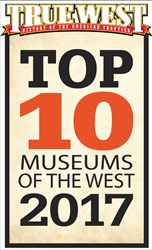 The West's greatest showman, William F. "Buffalo Bill" Cody gets his due...

The Buffalo Bill Center of the West has added to its list of accolades with its latest designation as True West magazine's 2017 Top Western Museum.

“The Center celebrates its 100th year this year—a century of telling the stories of the Old West” says True West Executive Editor Bob Boze Bell. “It started in a log cabin. Today, it’s a complex of five museums that goes beyond the heritage of Buffalo Bill himself. It does a remarkable job of preserving and sharing the Old West. The Buffalo Bill Center of the West truly is the top Western museum.”

“We’re honored to once again receive the Top Western Museum award,” says the Center’s Executive Director, Bruce Eldredge. “With this our Centennial year, the True West honor verifies that our efforts to celebrate the Spirit of the American West for a hundred years resonates with those who love the West as much as we do. It truly is our staff, our trustees and advisors, and our volunteers who make the West come alive each day for our visitors, on site and online.”

True West is the world's oldest, continuously published western American magazine. With its simple mission to “preserve the American West,” the publication launched in 1953 and is headquartered in Cave Creek, Arizona. For a dozen years, True West has recognized the best western museums and best western art museums in America for their dedication to keeping the Old West alive in our communities and nation.

Writing for True West, Candy Moulton says, “Museums across the West are embracing an ever-widening range of stories to interpret—from the geology and paleontology of the landscape to the cultural materials of western film and western art. Big new installations were made and significant milestones were reached this year…The West’s greatest showman, William F. ‘Buffalo Bill’ Cody, gets his due …with the recognition of the centennial of the Buffalo Bill Memorial Association.”

“Many thanks to those at True West who have truly become partners with us in our mutual desire to preserve the West for future generations,” Eldredge adds. “Long live the Wild West!”

Moulton, a two-time Spur Award-winning writer, and the editors of True West choose the winners based on the extraordinary efforts of the museums over the past year to create and host new temporary exhibits, as well as maintain dynamic permanent exhibitions.

For more information on True West magazine, visit truewestmagazine.com and find out the latest at the Center of the West on its Website or its pages on Facebook and Twitter.