Priasoft is Featured in GameChanger Report 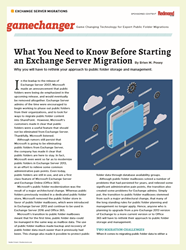 “Priasoft has been specializing in Exchange Server migrations for 15 years, and incorporates a wealth of experience into its Public Folder Migration and Synchronization Manager for Office 365 and Exchange.” ~ Brien Posey, 7x Microsoft MVP

Priasoft, the Microsoft migration experts, proudly announced their inclusion in Redmond Magazine’s, GameChanger Report, an 1105 Media Inc. Publication., which warns businesses, “What You Need to Know Before Starting an Exchange Server Migration”.

“Priasoft has been specializing in Exchange Server migrations for 15 years, and incorporates a
wealth of experience into its Public Folder Migration and Synchronization Manager for Office 365 and Exchange.” ~ From “What You Need to Know Before Starting an Exchange Server Migration,” Redmond Magazine GameChanger, Brien Posey, freelance writer.

Redmond Magazine’s GameChanger reports always target key issues plaguing businesses today and align them to ISV’s such as Priasoft whom are armed to address them. In this report, Brien Posey, a seven time Microsoft MVP with over two decades of IT experience, who frequently writes for Redmondmag.com, takes a hard look at Public Folder migrations. In particular after the release of Exchanger Server 2007 when Microsoft announced their de-emphasization of Exchange Public Folders and how companies like Priasoft, whom have a long legacy in seamless Microsoft migrations, are advancing their own tools to ensure their move is neither a challenge, nor blocker to migrating to new versions of Exchange or Office 365.

“There’s been a surge of businesses who’ve come to us in the middle of a stalled Exchange migration project, due to the complexities encountered with Public Folders.” said Eriq VanBibber, chief technology officer at Priasoft. “We are proud to have our tenure in the email migration space highlighted in Redmond Magazine’s Game Changer Report, as it will allow businesses to plan more effectively when migration Public Folder’s while understanding our steadfast commitment to the continued advancement of our migration tools.”

For more information on Priasoft, please visit their website at http://www.priasoft.com - or to download this Redmond GameChanger go to: http://bit.ly/2wnWm8s.

About Priasoft
With a North America headquarters situated in sunny Tempe, Arizona, and a practiced network of partners that extends their reach globally, Priasoft’s innovative technology is at the forefront of several of the world’s most notable Fortune 500 migration projects. Established in 1999, Priasoft was first to market a trusted toolset to expertly migrate customer emails to and from messaging platforms. Since then, their solutions have continued to “set the standard” for proven migration practices and have resulted in the successful migration of over 30,000,000 Microsoft Exchange Mailboxes and Public Folders worldwide. For more information on Priasoft and their network of partners, please visit their website at http://www.priasoft.com.