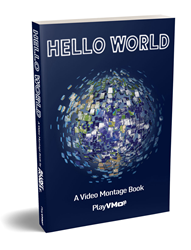 “Today, there are billions of videos stored on the Internet. Those videos capture the thoughts, ideas, emotions, beliefs, and memories of mankind. The Internet is like a global brain that stores the collective consciousness of humanity."

This year will be the 40th anniversaries of the launching of the two Voyager spacecrafts on Aug. 20th and Sept. 5th. A new book, “Hello World” (published by PlayVM, LLC, $19.99), was inspired by the Golden Record and is being created to take a look at the current state of our planet. It is a traditional print book, enhanced with links to videos that can be watched on any device with access to YouTube.

The book shares "video montages" which are collections of videos that are arranged to feel like you are watching a movie.

Ken Katuin, founder of PlayVM, watched more than 40,000 videos while doing research for this book. The best videos from around the world were used to create the montages. The book has over 100 montages and the various montages show the creative accomplishments of more than a billion people from every country on Earth.

The video montages also cover a variety of topics such as the environment, narcissism, prejudice, politics, religion, war, peace, society, pop culture, empathy, love, and more. “Hello World” will help people see and understand the world in new ways. This book will inform, entertain, challenge and inspire people to come together and change the world.

Here is a video that explains how the book works:

“Today, there are billions of videos stored on the Internet,” Katuin said. “Those videos capture the thoughts, ideas, emotions, beliefs, and memories of mankind. The Internet is like a global brain that stores the collective consciousness of humanity. ‘Hello World’ harnesses the power of our global brain.”

Here are some free samples of video montages from “Hello World.” When you go to a montage link, be sure to click the “play all” button so that all the videos are played. These sample montages each include from 20 to 70 videos. These links can also be shared with others.

The “Life” video montage shows the effects of climate change and it encourages people to come together and solve this issue:

The “Around” montage takes you around the world in 80 minutes:

The “Nature” montage shows how fascinating our natural world is:

The “Racism” montage explores how prejudice and injustice affect people:

The “Creativity” montage illustrates the imagination of mankind:

That link also provides additional information about the book, as well as the history of NASA’s attempts to represent humanity to extraterrestrials and how a previous attempt caused controversy.

Creators of time capsules, like the Golden Record, often show a nostalgic view of their world. NASA was careful to only show the good aspects of Earth on the Golden Record because they wanted to avoid controversy.

“Rarely does a nostalgic view of our world cause people to want to change things.” Katuin said. “This book helps us to appreciate what is amazing about the Earth, while at the same time recognize there are problems to address and solutions to consider for improving our world. ‘Hello World’ will cover important global issues and show concern for the environment and compassion for people and animals.”

More information, including the first chapter of the book and an additional video montage, is available at: http://www.BookHelloWorld.com