Two teenage brothers (ages 13 and 16) believe the US STEM education crisis begins in elementary school, and they intend to do something about it! After their robotics team won the VEX IQ Robotics World Championships, they founded RobotsNOW to provide after-school robotics programs to students, so they can experience STEM fields in a fun, hands-on way. 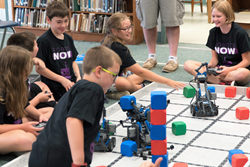 the kids ask if their schools will be starting robotics clubs because they want to join. Right now, the answer is ‘no’ because the schools don’t have the funds to buy robotics equipment

Although most attention regarding the US STEM education crisis focuses on the small percentage of US college graduates earning engineering degrees (4-5% of US graduates compared to 31% in China), this issue extends well into elementary school. In fact, two teenage brothers believe that’s where the STEM (Science, Technology, Engineering and Mathematics) education crisis begins, and they intend to do something about it!

After their robotics team won First Place at the 2014 VEX IQ Robotics World Championships, Gabriel and Chandler Wimmer learned that most US elementary schools had no after-school STEM programs. “We had to do something. Our experience in competitive robotics was so positive. Of course, winning was fun, but more importantly, it gave us confidence to try other STEM activities,” states Gabriel. “We wanted every kid to have access to the same programs that we enjoyed, so we launched RobotsNOW.”

RobotsNOW is a 501(c)(3) nonprofit organization that advocates for robotics programs for elementary school students so they can experience STEM subjects in a fun, hands-on way. Robotics is an ideal teaching medium since it combines all STEM fields to design, build and program robots. Plus, most kids are familiar with the building-block style of the more popular robotics platforms, such as LEGO NXT and VEX IQ.

Gabriel and Chandler are examples of the positive impact that after-school robotics programs can have. Gabriel developed a passion for STEM fields and now attends Thomas Jefferson High School for Science & Technology where he is a member of its Rocketry and CyberPatriot teams. At age 11, Chandler had the necessary confidence in STEM to enter a national toy invention contest, targeted for high school kids. He won second place, signing a royalty agreement with the sponsoring toy company for his design.

This summer, the brothers have expanded RobotsNOW’s scope to include free, week-long robotics camps in under-served school districts. The camps are extremely popular with over 25 students and teachers attending each camp. During these camps, students learn to use the engineering design process, program sensors, and build complex robots. “The camps are a lot of fun. The only bad part is that the kids ask if their schools will be starting robotics clubs because they want to join,” Chandler, an 8th Grader at Nysmith School, says. “Right now, the answer is ‘no’ because the schools don’t have the funds to buy robotics equipment. That’s why we’re launching a crowdfunding campaign.”

RobotsNOW’s crowdfunding campaign, titled “Help Start After-School Robotics Programs,” is hosted by Generosity.com, a subsidiary of IndieGoGo.com. The purpose of this campaign is to raise funds to donate fully-configured robotics labs that can support in-class and after-school robotics programs for every student at an elementary school. The cost of a robotics lab is $8000.

“I know $8000 is a lot of money,” admits Gabriel. “But I think it represents an incredible return-on-investment. Our economy is driven by STEM innovators, and the next Bill Gates or Elon Musk could be at one of these elementary schools! Regardless, these programs could help kids realize a passion in a STEM field that could change the rest of their lives.”

The RobotsNOW Crowdfunding Campaign is currently live and accepting donations.

Additional information about RobotsNOW may be found on their official website.