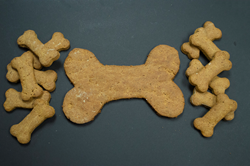 "Our homemade dog treats are a fun way for customers to show their love for their canine companions,” said Bobby Jucker, bakery co-owner and fifth generation baker.

This August Three Brothers Bakery is offering sweet relief from the heat for customers and their four-legged friends with special dog bone biscuits and large bone cakes. The bone cake is a large version of the treat, and both feature carrots, peanut butter, wheat and flour, making them the perfect, healthy treat for dogs. National Dog Day is Saturday, August 26 and the dog treats at Three Brothers Bakery are a fun, tasty alternative to other treats.

“Our homemade dog treats are a fun way for customers to show their love for their canine companions,” said Bobby Jucker, bakery co-owner and fifth generation baker. “We consider our pets to be members of our family, and we hope to see a lot of customers visit the store to treat themselves and their dogs.”

Additionally, Three Brothers Bakery launched a “Barkday” Party social media contest where one lucky fan can win a “Barkday” Party on the bakery’s Washington Ave. patio. The party will feature a large bone cake, individual treats for the owners to take home with the pups, water and some of the bakery’s newly created lemonade sodas and iced tea offerings for dog owners. Customers can enter the contest by posting a photo of their dog on the bakery’s Facebook page, commenting on the post with a picture of their dog and why they deserve a "Barkday" Party by Friday, August 11. The bakery will pick their three favorites and let the fans decide by popular vote on the week of August 14.

For more information regarding Three Brothers Bakery, its Dog Days of Summer promotion or any of its sweet products, please contact Amy Verbout at 713-225-0880 or amy(at)integrateagency.com