The Housing Tides Index increased one point in August, indicating modestly improved housing market conditions from one month ago. The Index is at 73.2 after scoring 72.2 in July and remains in healthy territory. 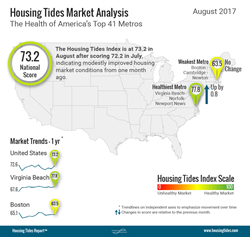 This month’s Index update reveals an improvement in housing market health as 32 of the 41 markets tracked by Housing Tides saw improved conditions.

This week marks the release of the August Housing Tides Report™, featuring an update to the Housing Tides Index™, an objective and sophisticated approach to quantifying and comparing the health of U.S. housing markets. This month’s Index update reveals an improvement in housing market health as 32 of the 41 markets tracked by Housing Tides saw improved conditions.

Understanding the health of a housing market and its relationship to other top markets requires an aggregated, comprehensive view of the industry. The Housing Tides Index provides a succinct monthly measure of market health across the top 41 U.S. markets. Referencing 18 market indicators ranging from unemployment rates and housing permits to rental vacancy and mortgage foreclosure rates, the Tides Index helps users understand exposure at a deeper level than is currently possible.

Housing Tides™ (“Tides”) is the only monthly report that provides a comprehensive measure and aggregated understanding of the health of the U.S. housing and home building industry. Designed to take the guesswork out of the vast amount of forecasting information published about this sector, Tides is a sophisticated report that delivers city-specific, updated information when market conditions change. It is the only report that uses natural language processing and machine learning to correctly understand and synthesize large volumes of data, making it more comprehensive, balanced, and reliable than any other report of its kind. For further information, please visit housingtides.com and connect on Twitter, Facebook and LinkedIn.