12-Foot Bronze Statue of Coaching Legend Tom Landry to be Unveiled in His Birthplace of Mission, Texas.

A 12-foot bronze statue of the late Tom Landry will be displayed at Tom Landry Stadium, just in time to kick off the football season for Mission High School, his former high school team. 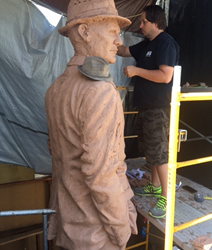 The statue, which weighs 1,200 pounds, will be a permanent fixture in front of Tom Landry Stadium, where Landry played football for his former high school. According to a release, the statue "depicts Landry coaching his team, the Dallas Cowboys, from the sidelines as he looks on with his well known serious expressions."

Sculptor Matt Glenn of Big Statues created the statue, spending time with people who knew him and gathering a plethora of photos of the coaching legend to help him draft a precise and accurate model. Glenn's team worked around the clock on this sculpture to create it in an impressive four month span, and it was then finished in bronze and moved to Tom Landry Stadium in Mission, TX, where it will be unveiled near the end of this month.

His former high school stadium which is named after him is now the only high school football field in the country outside of Canton, Ohio to have permission to use the official Hall of Fame logo as a part of its playing field. Tom Landry is ranked as one of the greatest and most innovative coaches in National Football League history, and his statue will stand as a timeless memory in his honor.