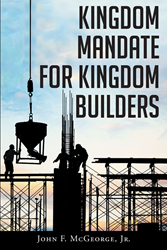 “Kingdom Mandate for Kingdom Builders”: a call to walk as citizens of the Kingdom and ambassadors for the Kingdom. “Kingdom Mandate for Kingdom Builders” is the creation of published author, John F. McGeorge, Jr. Dr. John F. McGeorge Jr., B.A., J.D., M.Div., D.Min. moved to Eastern Europe as a missionary in 1983. He spent three decades training pastors and Christian leaders. He also met his wife, Valerija, there. He has trained leaders and traveled extensively in West Africa and Asia where he started two international missions that work on five continents to this day. He is a retired pastor and an attorney of over ten years. He still travels to train leaders and continues his writing career for the benefit of believers and Christian leaders alike.

“Do you realize you are a citizen of the Kingdom of God now? Do you know the characteristics of Jesus as your King? Do you understand how to unlock the power and use the keys of the Kingdom on earth? What about praying the Kingdom down into your daily circumstances or community? These are critical questions that every Christian should know because the Kingdom of God was Jesus’s central message throughout His entire earthly ministry.” --John F. McGeorge, Jr.

Published by Christian Faith Publishing, John F. McGeorge, Jr.’s new book is a call to walk as citizens of the Kingdom and ambassadors for the Kingdom.

After His Resurrection, Jesus Christ gave His last forty days on Earth speaking of the things of the Kingdom of God. He empowered and directed Kingdom believers to change the world as change agents for the Kingdom of God. Jesus taught His disciples how to lock and unlock the principles of the Kingdom. He showed them how to flow in the power of the Kingdom and how to pray His Kingdom into everyday circumstances as a Kingdom citizen on Earth.

The Kingdom is here on Earth in seed form. Jesus empowered His followers to plant and grow His Kingdom in the midst of the darkness surrounding them. The question is whether or not Christians really know what the Kingdom of God is and how they can live as Kings on Earth like Jesus. Dr. McGeorge presents a thorough picture of the Kingdom on Earth today, so the Faithful can walk in the Kingdom and learn how to become Kingdom ambassadors in their homes, workplaces, communities, and everywhere else.

View a synopsis of “Kingdom Mandate for Kingdom Builders” on YouTube.

For additional information or inquiries about “Kingdom Mandate for Kingdom Builders”, contact the Christian Faith Publishing media department at 866-554-0919.