Why More People Under 40 are Becoming Travel Agents 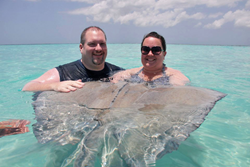 During the past 3 years, Cruise Planners has seen a 66% increase in franchisees under 40 joining the growing network. Cruise Planners, an American Express Travel representative, is the nation’s largest network of home-based travel agents who customize and plan a variety of vacations for all types of travelers.

As a profession, travel agents are making a resurgence with the number of travelers using a travel agent reaching an six year high in 2016 according to MMGY Global’s Portrait of the American Traveler. One factor could be Millennials are traveling the world more and are the age group most likely to use travel agents. Also, anyone who has started a travel search online knows how overwhelming it can be to experience information overload during an internet search. Because booking travel without support can be overwhelming, travel agents show their value by offering professional guidance, the best value offers and insider information for booking a vacation.

“It's been only four years since I drank the Cruise Planners ‘green Kool-Aid’ and it has been the best decision of my life…besides marrying my husband,” said Lori Osgood, 33, a Cruise Planners franchise owner based in Jacksonville, Fla. “Never in my wildest dreams did I expect to be this successful so quickly.”

Osgood is one of more than 1,800 Cruise Planners franchise owners who enjoys the benefits of working from home while selling vacations. As a franchise owner she is able to operate her independent franchise, while being her own boss, one of the many career perks important to young professionals.

“With Cruise Planners, I am a part of a family, have built some amazing friendships and have a fantastic support system from the Home Office Team and other franchise owners,” she said. “When I started my original career, I figured I could travel the world when I retire, instead I have turned my passion for travel into my career and we get to travel now rather than later.”

By focusing on industry relationships, she was able to propel her business and credits the growth of her franchise to the Cruise Planners training program and ongoing business development support she receives. As a budding entrepreneur, she regularly collaborates with other franchise owners in her area and proactively reaches out to the travel partners to create opportunities to network and learn from each other.

“These exclusive Cruise Planners events have been vital in the growth of my franchise,” she said. “Since being a successful travel agent requires me to travel and experience destinations, it’s important that I am able to work anywhere in the world and the Cruise Planners technology allows me to do that.”

Osgood works closely with her business development training coach and has set goals for the coming year as she continues to push past personal milestones in her travel career. As a relatively young travel agent she specializes in family vacations, honeymoons, destination weddings and more.

“You definitely get out what you put in and I went all in as a franchise owner,” she said. “I will share with anyone who will listen about how much I love being a travel professional with Cruise Planners and selling the world.”